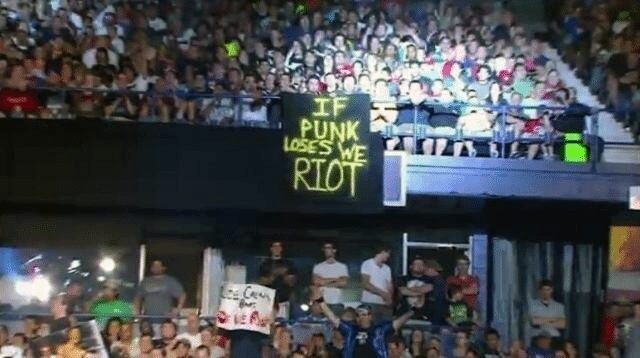 You already know the story here, shortly after the 2014 Royal Rumble, CM Punk walked out of World Wrestling Entertainment. The exact reasons are still not entirely clear but future PPV payouts, Batista and general burnout seem to be at the top of the list. It doesn’t really matter, the point is CM Punk walked out presumably to never return with his contract due up in June.

A segment of dense wrestling fans started taking to Twitter to proclaim this whole thing a work despite it being reported as fact by reputable wrestling journalists like Dave Meltzer. The very idea that taking one of their top stars off TV and house shows in some roundabout way to build up intrigue is not the way WWE or Vince McMahon does business. He’s not in the business of creating buzz, he’s in the business of making money.

It was reported to a (correction) source of Meltzer’s over the weekend that CM Punk WILL appear on tonight’s episode of Monday Night Raw emanating from Rosemont, Illinois (just outside of Chicago):

“One person told me he’s back. It’s one of the biggest names in the business and he evidently knows”

This, of course, will lead to the “It was a work!” crowd to puff their chests out about how they aren’t marks and didn’t fall for the story even though it was obviously real and coming to terms is a completely plausible way to solve this issue but whatever.

Rising from the muck of the “it’s a work!” crowd is a different subset of fans, ones carefully planning a hijack of tonight’s episode of Raw. The most notable Twitter account @ChicagoRawCrowd claims in their bio: “We are sick and tired of being sick and tired. Chicago = Change #hijackRAW” First off, you’ve probably heard that quote before, it was made famous by Fannie Lou Hamer a notable civil rights activist who delivered that quote in a speech alongside Malcom X in 1964:

“For three hundred years, we’ve given them time. And I’ve been tired so long, now I am sick and tired of being sick and tired, and we want a change. We want a change in this society in America because, you see, we can no longer ignore the facts and getting our children to sing, “Oh say can you see, by the dawn’s early light, what so proudly we hailed.” What do we have to hail here? The truth is the only thing going to free us.”

I don’t know if it’s intentional or not, but the very idea that Daniel Bryan not being pushed to our heart’s content is being likened to the civil rights movement is sickening. I’ll give them the benefit of the doubt on this because there are far larger issues with this “movement.”

The very idea of it, the objectives and the delivery are delusional.

Let’s start with the idea. The gripe is Batista winning the Royal Rumble and being pushed down our throats. That’s totally fair, but there’s already chinks in the armor. On Friday’s Smackdown, Batista began the slow turn to heel and while there hasn’t been a ton of movement in changing the WrestleMania main event from Orton/Batista to something a bit more appealing, I’m confident it’s going to change. WWE isn’t that stupid, they recognize Batista’s diminishing returns and are already addressing it. Somehow this change was made without having to make a Twitter account.

There’s more than just Batista, Bryan is another focal point and the relative lack of push he’s received over the past few months. I was upset initially, but I’ve started to see the build and although his big title win may have to wait until Extreme Rules, this is hardly something worth fighting for. Over the past few weeks, the commentary, merchandise and perception of Bryan has evolved from the “flying goat” and guy with the crazy, silly beard to a more serious, more polished Bryan. Out with the beard shirts in with the Yes Movement, change is already happening. You could argue he should’ve had a title win over the past six months, which, yeah, perhaps he should have but you can’t argue he’s been the focus of the show since SummerSlam. Cena/Orton may be the PPV main event, but Bryan has been ending more Raws than both men, certainly more than Orton over the last half year. This isn’t necessary.

Then, there’s a general sense of WWE not giving “us” what we want, which is… who the hell knows? The in-ring product of WWE and Raw is the best it’s ever been. There’s no debate anymore, this is the best ever. There is no other era where you’d get 20 minute matches between über-talented workers like Bryan, Cesaro or The Shield.

There’s also some random gripes with the “PG era” which is maddeningly stupid because good wrestling is good wrestling whether to not the show is rated PG or TV-14. If you’re pining for the days of Beaver Cleaver and Val Venis, more power to you but I’m okay with the PG era, I remember it being pretty good in the buildup to Money In The Bank 2011.

Which segues perfectly into my final point — delivery. @ChicagoRAWCrowd and various #HijackRaw tweeters continue to mention Money In The Bank 2011 as a time when the Allstate Arena crowd hijacked a show in the IWC’s favor. This couldn’t be more patently false, I know because I was there. As frequent Voices of Wrestling contributor Vince Morales put it perfectly:

Put it this way there was no #HijackMITB before the show that made CM Punk and Chicago famous. @voiceswrestling

There wasn’t a #HijackMITB in the lead-up, I don’t recall anyone saying “Hey, let’s all boo John Cena and cheer CM Punk” it just happened, organically and that’s what made it so powerful and so fun.
When “This Fire Burns” hit the loud speakers the Allstate Arena exploded, suddenly Chicago flags were flying everywhere, people were jumping up and down, it was infectious, you couldn’t help but be apart of it. It was that moment and that crowd that made me start this very website, the objective of the site has changed since then but that’s why it’s Voices of Wrestling — we fans created a voice for ourselves. 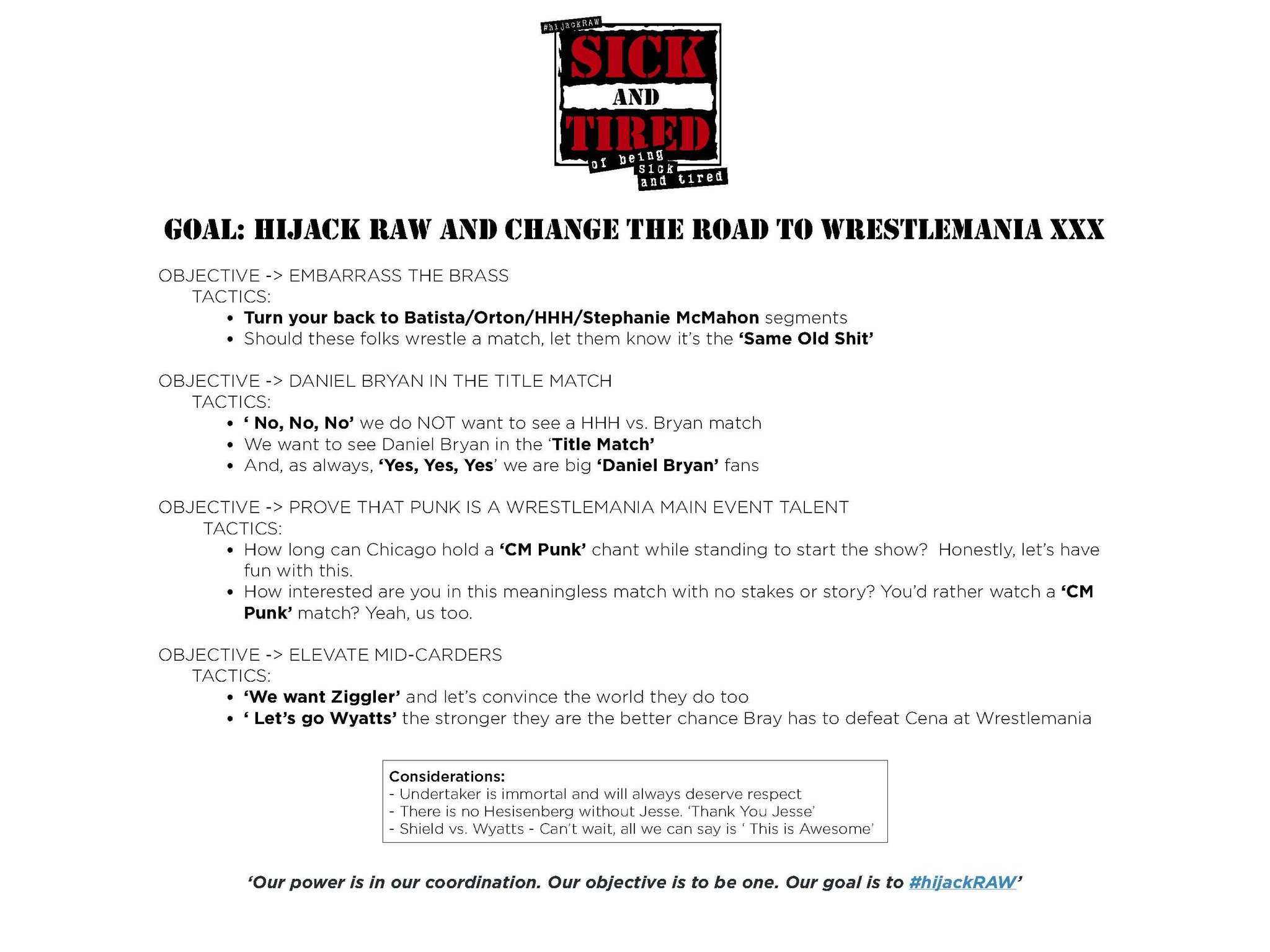 Fast-forward to today and we have a set of rules to print out and bring with us. Objective one is embarrass the brass: We’re suppose to turn out backs to HHH, Batista, Orton and Stephanie McMahon. That’ll show those heels! In the event that these men wrestle a match, we’re suppose to chant “Same Old Shit!” Oh fun!

The hypocrisy of this movement and the set of rules/directions being passed around is too rich. Let’s step back and look at what’s happening here.

We’re upset that Daniel Bryan, who organically began receiving crowd reactions due to his great in-ring work, stellar charisma and an awesome chant isn’t being pushed to our liking and instead WWE is forcing us to follow their plan and cheer for the returning Batista. The only way to respond, of course, is to force people to follow a plan and a set of directions.

Force feeding people a set of cheers, boos, chants and whatever is completely the opposite of what should happen at tonight’s Raw. We should boo/cheer and react as we all please, if it so happens that we’re all on the same wavelength, and we all boo Batista as loud as humanly possible or all do the Yes chant like its never been done before, bravo! Go us! But to send out a list of rules to follow as a way to oppose the status quo or The Authority? Beyond stupid.

This whole movement hasn’t made me any less excited to attend Raw tonight. I can’t wait, I’m counting the seconds down but I really hope that we as a fan base in 2014 can be smarter than piggybacking some stupid #HijackRaw movement and instead let our voices be heard the way it should be, organically.

Stuck With Fale? The Parallels of Okada and Nakamura