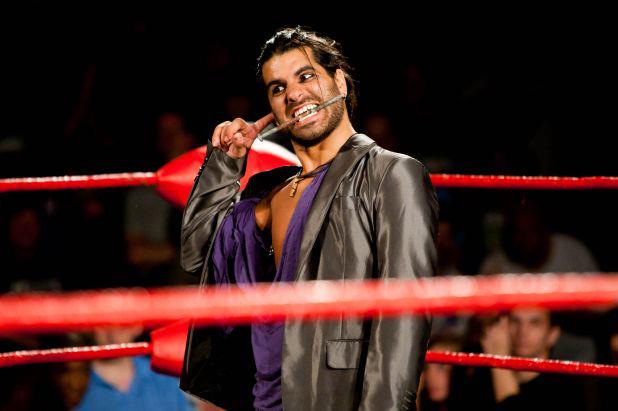 ROH left the comfortable confines of Nashville and moved on to Pittsburgh. Our main event for the evening will be a triple threat match for the ROH Television championship, but we start off with some tag action. Let’s get to it.

Adrenaline Rush (ACH & Tadarius Thomas) vs. Decade (Jimmy Jacobs & BJ Whitmer) (/w Roderick Strong):
Decade refuses to shake hands since Adrenaline Rush are beneath them. Jacobs and Thomas start off. Thomas forces Jacobs to his knees early when they lock hands, but Jacobs gets out by first going into cross-legged head scissors, then his airplane spin. Thomas avoids any punishment by cartwheeling through that. An arm drag takes Jacobs down and a single-leg drop kick keeps him there.  Thomas tags in ACH while Jacobs escapes back to his corner. 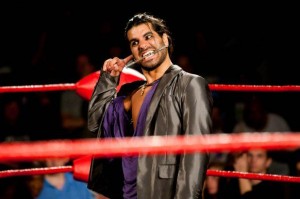 ACH and Whitmer circle each other. Whitmer knees ACH in the gut instead of locking up, then starts to rough up the youngster. ACH tries to bulldog Whitmer with no success as Whitmer pushes him away. Whitmer tags Jacobs back in, who chokes ACH almost immediately. Jacobs gets the rope pulled down on him, sending him outside. ACH planchas onto Jacobs then throws him back into the ring. ACH goes up top and misses what was supposed to be a dropkick. Maybe? He jumped but didn’t go for anything. Good thing too, since that let ACH land on his feet when Jacobs ducked. ACH slaps Jacobs silly and Jacobs stumbles around, dazed. Whitmer is in the ring and he grabs Jacobs by the tights and the neck then hurls Jacobs at ACH. Jacobs spears ACH so hard that we have to go to a commercial break.

Whitmer and Jacobs are in control after the break. Jacobs pins ACH after a neckbreaker but he only gets two. Jacobs rushes at ACH when ACH is in the corner. ACH shellshocks Jacobs into the middle turnbuckle, buying himself enough time to tag in Thomas.

Thomas uses his capoeira kicks to bring down Jacobs and Whitmer. Thomas has to throw Whitmer over the top rope to get some alone time with Jacobs. Jacobs joins Whitmer a moment later, which lets Thomas know its time for a suicide dive. ACH is back in the ring and wants to join the jumping party. Too bad for him that Whitmer cuts him off with a hard chop. Thomas gets back in there, as does Jacobs, and Jacobs ends up leg dropping Thomas before long. Jacobs avoids a high kick but gets caught with a half-nelson suplex. Both men tag out. ACH has Whitmer reeling but Jacobs interferes with a pin attempt. Thomas is on the apron. Jacobs charges at Thomas, dives through the ropes, and spears him onto the floor below. Jacobs sent Thomas flying all the way to the barricade with that one.

Back in the ring, ACH hurricanranas Whitmer. He hooks the legs, but Whitmer kicks out. Big boot from Whitmer. Jacobs and Whitmer land their new tag finisher, “the all-seeing eye”, and this one’s all done.

Match Rating: **1/4 Good enough for an opener. Whitmer and Jacobs work well together, which should be no shock given their experience. The biggest problem here was the hot tag: Thomas showed almost no fire. His capoeira kicks were sometimes effective in the match but after the hot tag they looked slow and choreographed. The ending was also a bit sudden.

ROH gives us a promo for the top prospect tournament finals, recounting the roads that Raymond Rowe and Hanson took to get there. It’s a showdown of two big, hard-hitting men. That’s the kind of wrestling I like.

Top Prospect Finals – Hanson vs. Raymond Rowe: Both men follow the code of honor to start, but Hanson immediately knees Rowe after the formality. Rowe knees Hanson right back and clotheslines him over the top rope, taking himself out too. Rowe gets back in the ring and looks like he’s going to dive back out at Hanson, but Hanson boots Rowe in the head before the dive.

Rowe and Hanson are fighting a physical match when they brawl. Lots of kneeing and clubbing with Hanson getting the best of it. Hanson hits the ropes and  Rowe responds with a stiff forearm. Rowe follows up with diving double knees into Hanson’s chest. Hanson goes flying into the turnbuckles from the force of that. Rowe hits a big German suplex on Hanson but the ensuing pin gets a two count. Hanson catches Rowe and powerslams him. Two count.

Rowe ducks under a swinging ax handle, lifts Hanson up by the waist, and slams him down hard. Hanson backs Rowe into the corner, facing the center of the ring himself, and delivers a couple of hard back elbows to Rowe. Hanson gets some distance so he can charge the now sitting Rowe, but Rowe gets out of the way in the nick of time. Hanson crotches himself on the bottom turnbuckle. Rowe comes up from behind and hits a backdrop driver. Hanson is up immediately and hits a backdrop driver of his own. Rowe pops up too and hits another backdrop driver.  He wants a full-nelson slam after that but is not about to get it. Hanson elbows his way out, cartwheels past Rowe, and lariats Rowe off his feet.

Hanson tries for his spin kick of doom. Rowe catches the leg, hoists Hanson into the air, and slams him down with all his might. Rowe goes for the Death Sentence again, which starts with a full-nelson. Hanson gets out of it, plants a foot, and swings the other around with all his might. Spin kick of doom. It smashes Rowe’s head. Hason makes the cover. One, two, three, this one is over. We have a top prospect.

Match Rating: **1/2. I love a big man battle, and this was a nice example. There were a couple instances where someone went for a strike and swung in a way that never would have hit. That’s a huge pet peeve of mine. None of them were egregious, but it was definitely noticeable on the first spin kick of doom. A few more minutes to draw out the selling and add in some more straight brawling but keeping their other spots would have helped. Otherwise, this was good. I want to see more of Rowe and Hanson.

Mark and Jay Briscoe have a pre-recorded promo. They’re back together as a tag team next week. I’m hyped for it. Next week’s main event is a three way elimination tag match: The Briscoes vs. Cole & Hardy vs. Elgin & Hero.

ROH Television Championship – Tommaso Ciampa (c) vs. Jay Lethal vs. Matt Taven: Some people are really down on triple threats, like they hate all of them. I can’t say I’m that down on the concept, but I’m not a fan either. The pacing is difficult on triple threat matches but they’re not all stinkers. Hopefully this one can deliver.

Truth Martini and the Hoopla Hotties come out to confront Taven before the match. Truth says he knew exactly what Taven wanted from the moment they met. Truth sends the hotties away because hoopla is DEAD. The crowd is a lot more upset than Taven about this. Taven fires Truth. He speaks for himself now.

Tommaso has a determined, intense look in his eye as he comes out. So intense that there’s no time for introduction. We’re straight into the action. Action so hot that I can’t handle it, if by handle it I mean effectively type out what’s going on, so highlights will suffice.

Lethal takes turns going back and forth onto Taven and Ciampa with suicide dives to the outside. He dives out of the ring six times. SIX TIMES. And just after that Ciampa throws Taven into the guardrails outside.

Ciampa pulls up the pads outside, exposing the cold, hard floor. Ciampa gets ready to suplex Taven but Lethal interferes. Ciampa hits a running powerslam on Lethal into the guardrail. Taven eats a suplex outside, but he lands on the padding instead of the exposed ground. Ciampa is in charge once him and Lethal are back in the ring. Taven has to enzugiri Ciampa to wrest away control.

Lethal attempts a lethal injection on both opponents, but they catch him. Lethal rolls out of a messy predicament before anything goes too sour. Lethal has Ciampa in a koji clutch until Ciampa gets his foot on the bottom rope. The lethal injection lands on Ciampa but Taven frog splashes Lethal almost instantly. Martini distracts Taven for a moment after he tried to give Taven The Book of Truth. Lethal superkicks Taven, who leaps outside with a purpose. Lethal rolls up Ciampa and the announcers count the pin: one, two, three, four. Ciampa kicks out before five, but the ref never made an official count. Lethal goes out of the ring. Truth Martini trips Taven as he gets back in the ring. One Project Ciampa later and there’s a three count.

Match rating: **1/4. The crowd chants that was awesome, I’d say “that was okay.” It protects Lethal and Taven but Ciampa keeps his belt. Everyone wins! So no one wins, really. It was not the rare triple threat that rises above its stature, nor was it a dud. Taven’s selling on the Lethal superkick was almost comical, so check that out.

This week did not have the big marquee main event like last week. No match really stands out in any superlative way. But there were three solid matches that are worth a watch and enjoyable in their own rights. The top prospect tournament final was my favorite, though I think it could have used a couple more minutes and some more intense brawling. The big takeaway: ROH TV doesn’t feel like malaise forever anymore.

Lucha of the Hidden Temple (Episode 8)