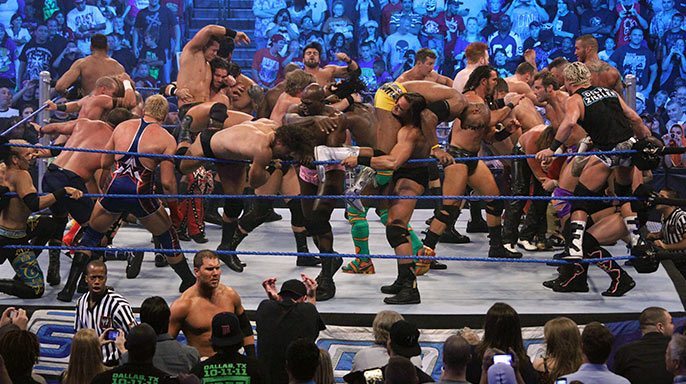 I searched “WWE match” on Youtube and this was the first result. I guess Smackdown battle royals from two years ago are what the WWE really want to push on youtube. Works for me, I friggin’ love battle royals. Also, it’s battle royals, not battles royal. Don’t be that guy. Let’s do this.

Winner receives the right to a title shot of their choosing that same evening. I’ll bet some idiot goes for the IC title. The match description says this the biggest battle royal in WWE history, so we’re in for a real treat.

Then Intercontinental champion Cody Rhodes comes out with his belt on, so I’m wrong. There are some conspicuous gaps in the line when the superstars walk out. Notably, Orton comes out last and about 10 feet away from anyone else. All 41 guys jam themselves in there. The bell rings and the brawling commences. Way too much going on to call the action with any effect. Somebody dumps the masked Cody Rhodes to the outside a few seconds in, making him elimination numero uno.

Johnny Curtis goes out second. This is during the heel Michael Cole commentator era, so enjoy that if you watch. JTG falls out, never to be seen again. Michael McGuillicutty, Derek Bateman, and Titus O’Neal follow soon after. There’s a Yoshi Tatsu sighting. Matt Striker takes a hard bump and hits his head on the mat outside. The ring’s slowly thinning out when a commercial break gives us a reprieve.

William Regal steps onto the outside with the grace of a fine British gentleman. Percy Watson is out too. Morrison and Ziggler come next, ridding the ring of our mid-sized athletic guy contingent. Trent Baretta takes the craziest looking bump yet when he front flips over the rope, lands on his feet, then face plants. An Uso goes out, glad it’s not just me who can’t tell them apart that quickly as the commentators never specify which it is. At this point the wrestlers actually have some room to move around. Ezekiel Jackson dumping Ted DiBiase over the top helps. Booker T hypes out how great Drew McIntyre looks tonight. Some indy geek falls out and the camera barely catches it. He’ll never matter anyhow.

Tyler Reks and Curtis Hawkins go flying out of the ring thanks to Mason Ryan. Drew McIntyre doesn’t live up to the hype, he’s out next. Mason Ryan press slams Justin Gabriel, only for someone to jump him from behind and casually tilt him over the top rope. It’s a clean-shaven Wade Barrett. So much for British pride. CM Punk high kicks Primo when Primo was on the apron, so he’s out. Christian almost eliminates Santino, but Santino pulls himself back up onto the apron. He starts getting the cobra ready when Christian pops him in the jaw and sends him packing.

Miz eliminates Alex Riley by pulling down the top rope as Riley charges. Kofi Kingston skins the cat to stay alive, grabs Swagger with his legs, but can’t get the elimination on Swagger. Swagger gets an ankle lock on Kofi, who is still clutching the top rope and dangling upside down. A Jack Swagger boot ends that little showdown. Ryder goes out without much ceremony. Sheamus grabs Otunga and then the other Uso by the back of the neck and throws each over the top rope within a few seconds of the other. He really should go for that more often.

Ezekiel Jackson wants to get the jump on Sheamus. Sheamus isn’t having it and fights his way off of Jackson’s shoulders then clotheslines Jackson over the top. Sheamus stands tall in the middle of the ring while everyone else slouches in the corner or lays on the ground. Heath Slater almost meets the same fate as Otunga and Uso #2, but he manages to hang onto the top rope. Sheamus brogue kicks him for the insolence, leaving us with only ten men left.

CM Punk uses his tried and true “lay on the mat and hope no one notices me” method to great success. Sheamus continues his dominant run when he powerbombs Sin Cara Negro over the top and into Ezekiel Jackson and two others, who manage to break his fall. Christian lines up Sheamus from the corner. He sprints at the Irishman, looking for the diving hug, but Sheamus knees him in the face. Sheamus hoists Christian up on his shoulder. Christian escapes before he gets too near the ropes, then tries to push Sheamus over the top. Sheamus blocks a punch, puts his hand behind Christian’s neck, and throws him over the top rope. See, it’s that easy.

Pre-3MB Jinder Mahal is still in there, working over Sheamus. CM Punk dumps R-Truth, Miz eliminates Punk immediately after that. Miz eats a brogue kick and rolls out of the ring, under the bottom rope. The commentators mention that he is not eliminated, but I’m sure that won’t come back into play. Punk and R-Truth keep on brawling outside, distracting the camera man from seeing Christian eliminate Sheamus. Sheamus gets right back in there and starts chasing him around, inside and then outside of the ring. Christian makes a run for it, all the way up the ramp and to the back. Orton eliminates Wade Barrett and immediately RKOs Jack Swagger after that. Swagger goes out next. Jinder eats an RKO and Randy dumps him out, leaving nobody else standing.

But where’s the bell? Nowhere yet, because the Miz is still in this. He sneaks back into the ring and throws Orton over the top rope. He celebrates his win prematurely. Orton is still alive. Miz puts the boots to Orton. Orton ducks a Miz clothesline and then power slams him, getting back in control. He does that mat slapping taunt but fails to deliver an RKO. Both guys end up on the apron. They square off while clutching the top rope. Punches fly as each backs up the other. Miz shoves Orton into the ring post, but it’s not enough to end this. Orton boots Miz’s gut and RKOs him onto the apron. Both men drop out, but Miz hits first. There’s some confusion about who hit first, even though it looked pretty clear to me. Orton’s the winner, so he faces Mark Henry later that night.

Even by Battle Royal standards this was pretty bad. It’s almost sixteen minutes long and hits on plenty of the big tropes: eliminated guy eliminates a live contestant, the photo finish, the hide outside the ring and hope no one notices, etc. etc. It’s no Wrestlemania 14 tag team battle royal, i.e., the gold standard of battle royals. Why is this the first result for “WWE match” on Youtube? This wasn’t even fun to watch. Here’s, watch it, wallow in this with me: