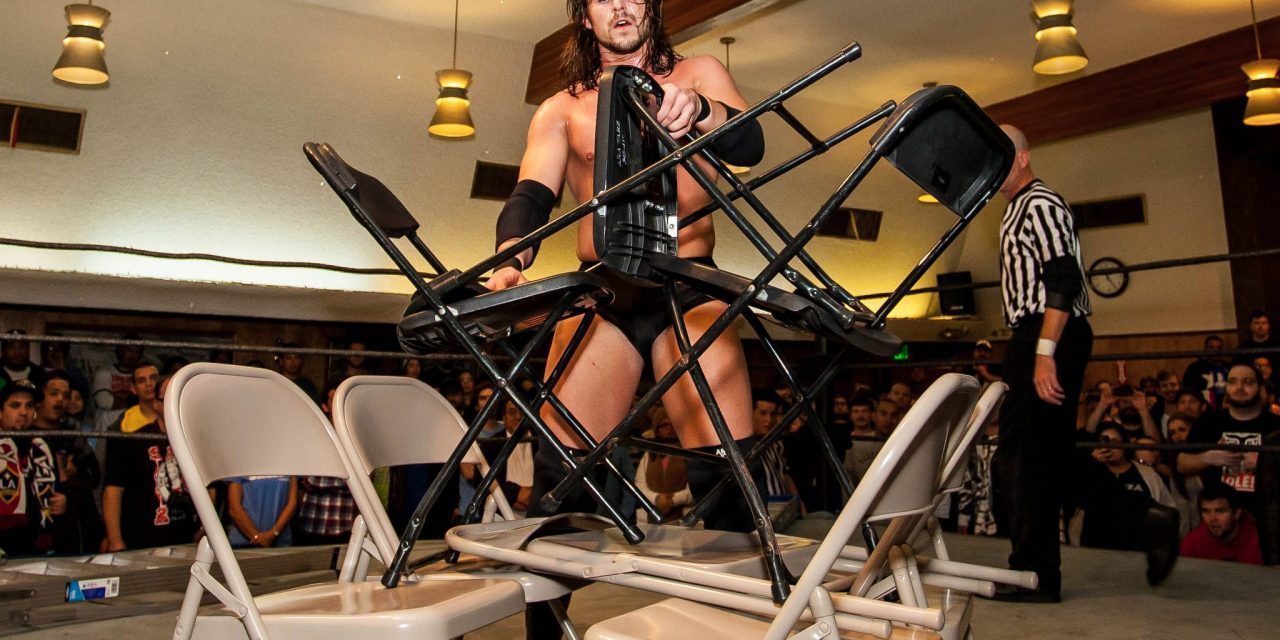 Pro Wrestling Guerrilla had a fairly strong year in 2013. Every show had something to offer and there was rarely a stinker in the bunch. The shows are always fun and the crowd always kicks things up a notch. There wasn’t a match that would crack my annual Top 10 matches, and probably not even Top 15 overall, but that was of no fault of PWG. New Japan Pro Wrestling was just that good in 2013. It happens.

What PWG did give us was a flurry of highly regarded 4+ star matches and the Year of Adam Cole.

The 2013 Year started off on a high note for PWG with December’s “Mystery Vortex” pay-per-view, featuring a big star-making match. Cole would challenge Kevin Steen for his PWG World Title in a Guerrilla Warfare Match that would be one of the best PWG offerings of the year. Cole won the Battle of Los Angeles in 2012, setting up this match late in the year and just makes the cut of the 2013 Observer Calendar.

This match quickly gets wild and stays that way the whole way through. The brawl turned into a legitimate hardcore match. Cole is suplexed through a mountain of chairs, Steen eats Thumbtacks and spits them in Cole’s face leading to a wild end with Cole getting the legitimate 1-2-3 to win the PWG Title. ****1/2

2013 also saw the goodbye of Reseda favorite El Generico at “DDT4”. He and Kevin Steen would team up one more time, for old time’s sake. They would lose in the finals to The Young Bucks.

“All-Star Weekend” is always one of PWG’s most hyped and satisfying events. This year was no different. Night 1 saw a Match of the Year Contender and Night 2 outdid all expectations. “All-Star Weekend Night 2” would be one of the best American shows in a stacked 2013.

How do you take Night 1’s awesome tag match and make it better? You add some big uglies. Michael Elgin and Brian Cage (known as The Unbreakable F’n Machines) were a go-to mid-card tag team for PWG in 2013. They were often paired with flippy bastards and delivered good matches. Here, they team with Kevin Steen. Rich Swan and Ricochet would be joined by stuntman extraordinaire, AR Fox and what you had here was three big power guys versus three flippy bastards and you got expected results —awesomeness. The dichotomy was great: the best big dudes the States have to offer against the best high fliers. They run about a half hour, and the last 15 minutes are beyond badness. AR Fox would eat 7 or 8 finishers before taking the pin and receives a standing ovation for his troubles. ****1/2

How do you top that? You don’t. However, Night 2 of “All-Star Weekend 9” would hit you with a real treat to top off the night.

Drake Younger was a rising star for PWG and has evolved as the uber go-to babyface in the wake of El Generico going to save orphans in Mexico (or the WWE, whatever). He would beat Sami Callihan in a best of three series of matches over the past few shows to earn a title shot at ASW9.

Drake comes into the match fresh off a win versus Sami Callihan with 18(!!!) stitches in head and gauze wrapped around his dome like a mummy. Awesome. Younger goes HAM on Cole for nearly 20 minutes. The crowd is BEGGING for the title change and they don’t give it to’em. Cole would squeak out a really dirty win. ****+

For Younger, this was a career maker. He is no longer the Ultra-Violent Golden Boy, as he has moved on from the super hardcore matches and is now your never-say-die babyface and the gimmick works very well for him.

Next up, TEN, PWG’s “Is Your Body Ready?” event. It would be the start of PWG’s second biggest push: Kyle O’Reilly. O’Reilly has developed into a super over babyface in Reseda. His MMA-inspired style has really come into its own out west, and O’Reilly’s character doesn’t take itself as seriously as it does on the East Coast in ROH. His ascension would begin with a mid-card match against Davey Richards.

Kyle O’Reilly vs. Davey Richards @ Is Your Body Ready?

It is American Strong Style in all the best and worst ways. If you are into this style, you’re going to love this little gem. If not, carry on, nothing to see here. I dug it and it is one of the better Davey vs. Kyle matches out there, in my opinion. ****-

Next up…TEN, the 10th Year Anniversary show. It featured, once again, a gem from Kyle O’Reilly, this time against TJ Perkins.

You won’t see this match on too many Match of the Year lists, but O’Reilly and Perkins put together one of the best matches for guys into ring-work you’ll see all year. It was crisp, it was a clash of styles with the Submission American Strong style versus Perkins’ lucha-inspired hybrid style. It was done flawlessly. It took a while for the Reseda crowd to get into this, but once they realized what was taking place, they ate it up. ****-

However, the match of the night would go to another power player(s) in PWG, The Young Bucks, as they took on the Inner-City Machine Guns and the DojoBros.

Last year, PWG had two Ladder Matches make my annual Top 10. In 2013, unfortunately, this ladder match will fall a bit short. This was a huge-spot-a-palooza. ****

Now, the next show is usually, PWG’s annual magnum opus. Its the Battle of Los Angeles tournament. A two-day dash to greatness featuring a who’s who of the best on the Indy circuit today. Day 1 would go by without much buzz but Night 2 is an absolute treat and the best American show of 2013. As I stated in my review, what made this show so damn good STARS (plural) WERE MADE.

Johnny Gargano is already considered an ace of sorts on the American Indy scene. He was taken to superstardom earlier in the year in his heel turn match against SHINGO for DragonGate USA on WrestleMania weekend. However, he was a bit slow to warm in front of the Reseda crowd. All of that changed on August 31.

There was a distinct buzz to this match. Gargano had a bit of a swagger and Steen had a different vibe to him. They get right into the match, saving the usual PWG early match shenanigans. Tons of big, nasty spots. Steen sells an injured shoulder mid-match that really makes the bout. Steen throws in a great Act of Defiance, Gargano reverses a Package Piledriver into his GargaNO Escape submission hold to tap Steen out and the crowd really pops for Gargano. It would be his breakout match in PWG. ****+

Later on in the night, another recent newcomer to PWG, ACH would make his name known. Kyle O’Reilly would face ACH in a quarterfinal match that would be one of the best matches of the year for PWG.

The match would start out slow with a little crowd pleasing comedy. ACH is really getting over with the fans. This match would be a constant battle of ACH trying to mount the comeback on O’Reilly. Once he does, O’Reilly would catch ACH in an arm breaker and tap him out. Crowd goes nuts. ACH gets the standing ovation. ****1/2

If Gargano could outdo himself, he would…and he does when he takes on Michael Elgin in the semi-finals.

Big match where Gargano cements himself as a fighting babyface. Big go-home portion of the match where Elgin would finally put Gargano away after buckle bombs, lawn darts, and his signature Elgin Bomb off the top rope. ****1/4

Kyle O’Reilly would beat Michael Elgin in the finals in a solid match, but above all of it where the star-making performances on the undercard. O’Reilly would be made a top contender on this night as well. Maybe the best use of nearly three hours of television in the United States in a few years. Big night for the promotion.

At the end of the show, a new faction would also be made – The Mount Rushmore of Wrestling – Adam Cole, The Young Bucks, and Kevin Steen would join forces as the evil heels for babyfaces to deal with. It is an awesome group.

To sum up PWG’s 2013, it was a year where we got to see some strong character development from many of their top guys. It was a bit of a transitional year as it was used to establish a new wave of top stars for the promotion. Not only was Adam Cole established as the alpha-dog, Johnny Gargano, Kyle O’Reilly, and Drake Younger were established as the top babyfaces and were all embraced by the Reseda crowd.

Because year end articles are all about lists, here are the Best Pro Wrestling Guerrilla Matches of 2013:

Lucha of the Hidden Temple: Episode 2