I like to think of New Japan’s Korakuen Hall shows as their equivalent of Monday Night RAW, especially in the new iPPV era. If that’s the case, then the 12/23 show from Korakuen would have to be considered the “go home RAW” for Wrestle Kingdom 8, as this was the final chance to shoot angles and drum up interest in the biggest show of the year.

As a go home show, this show succeeded. This was a much stronger show than the 12/21 show in the same building, and not only laid the final bricks to Tokyo Dome, but also foreshadowed some future singles matches as well.

1. Sho Tanaka vs Yohei Komatsu – This was a rematch from 12/21, and I fully expected the young lions to exchange wins. Tanaka won the first match with a Boston Crab, and Komatsu got his revenge here with the same hold (crab holds are traditionally popular finishers for young lions, as it’s an “easy” hold to learn). Look, I get irrationally excited about young lions matches, but this was genuinely a great match. They started off with some nifty mat work, and both of these guys really know how to exchange holds and sell. Komatsu used a body scissors to ground Tanaka, and later hit a beautiful Fisherman’s Suplex. They really got the crowd into it, and there was a real buzz when Komatsu locked on a Boston Crab. Tanaka fought to the ropes and the crowd popped. A few minutes later, Tanaka had Komatsu in the crab, and Komatsu made the ropes. Another nice pop, and the fans were now way into this. Tanaka tried to steal it with a small package, and then a schoolboy. Komatsu fired back with a great flying forearm. The sense of struggle from both guys here was just great. The story here was these guys were evenly matched and mirror images of each other, so Tanaka tried a flying forearm of his own. Komatsu ducked it, rolled through, and grabbed a single leg crab in a great looking spot. Tanaka fought & fought, but had to tap. A legitimately great match to open things up. Seek it out. ***3/4

2. TAKA Michinoku  & Taichi vs KUSHIDA & BUSHI vs Jado & Gedo – This was fast paced and fun. I want to go on a bit of a Gedo rant. Gedo might be the best kept secret of 2013. Aside from multi man throwaway openers, every match he’s been involved in this year has been pretty good, whether it was this three way tag, the fun junior tag league run with Jado, a singles match in San Antonio vs Scot Summers, or his MOTY contender against Prince Devitt in Korakuen. KUSHIDA was sharp here, as was BUSHI. Taichi found a way to hide again, like he so often does. TAKA pinned BUSHI with the Michinoku Driver II, as TAKA & Taichi pretty much had to win since they are in the title match at Dome. **1/2

3. Toru Yano & Takashi Iizuka vs Jushin Liger & Tiger Mask – The faces attacked right at the bell. Speaking of underrated 2013’s, how about Liger & T.Mask? Their subtle heel run in NOAH was a lot of fun. Tiger Mask IV was interesting for the first time in…well, maybe ever. Yano had a HAMMER in his tights, and was pounding Liger’s chest with it. That was kind of silly looking. Iizuka hit Liger with the iron glove, and Yano rolled him up for the pin. Better match than it had any right to be. Post match, Iizuka ripped off Tiger Mask’s mask, as the young lions scurried to cover him up. **1/2

4. Hiroyoshi Tenzan, Satoshi Kojima & Captain New Japan vs Yuji Nagata, Manabu Nakanishi & Tomoaki Honma – This was flat out great when Kojima was in with Honma. Honma is a great pro wrestler. No hyperbole. He’s great. He makes everybody look like a million bucks, sells at an elite level, and really connects with the crowd. He has surpassed Heath Slater, who I also love, as my Best Jobber Guy Of 2013. I’d really like to see him get a mid card push next year. Kojima hit his big lariat on Honma for the win. Nothing match when the rest of the guys were in. **3/4

5. Togi Makabe & Kota Ibushi vs Tomohiro Ishii & Yujiro Takahashi – Speaking of lazy Taichi, it’s always fun to see how little Makabe gets away with doing on these non big shows. Seriously, count the bumps he takes on non major shows. He’s crafty veteran. He did work hard in this match, though. Everybody did. And it was pretty damn good, especially when Ishii & Ibushi were in. They teased a match between these two during G1, and based on the interactions here, it’s still in the cards. And if it happens, it will be pretty awesome, because it will give Ishii a chance to play bully in a bit of role reversal. There is a very noticeable charisma between the two.  Anyway, the tease here was strong. Makabe pinned Yujiro with the King Kong Knee Drop. Still no match for Ishii or Yujiro at Dome, which is very disappointing. ***1/2

6. Minoru Suzuki vs YOSHI-HASHI – Poor YOSHI was getting triple teamed by Suzuki, TAKA, & Taichi, as if Suzuki needed the help. Suzuki found Yano’s hammer that he had discarded earlier and used it on YOSHI’s arm. This was looking like a squash, but YOSHI made a brief comeback and fought all three men of. But it was too much to overcome, as Suzuki hit a (very) delayed Gotch Piledriver for the win. This was interference for the sake of interference, as Suzuki was toying with YOSHI the whole time and it was done in such a way that did not make him look weak at all. Post match, the lights went out, and Muta’s music hit. He appeared in the crowd to a big pop, but when he took the mask off, it was Yano. Oh, that wacky Yano. Harmless match, fun final angle before the tag match at Dome. **1/2

7. Kazuchika Okada & Shinsuke Nakamura vs Hiroshi Tanahashi & Tetsuya Naito – Tanahashi was announced first. Naito worked the meat of the match, as they really focused on Okada/Naito. Naito got a much better reaction here than he did two nights earlier. No booing, and an even split of chants. The finishing sequence was hot. Okada cleaned house on Tanahashi & Naito, hit the big dropkick on Naito, and went for the Rainmaker. Naito reversed it into a Pluma Blanco. Probably should have saved that spot for Dome. Nak made the save as Okada was fading out. Naito hit a German for two, and hit another suplex to set up the Stardust Press. He hit it. Crowd went bonkers. Nak nailed a Boma Ye out of nowhere at two for the save. Tanahashi came off the top on Nak with a High Fly Flow press to take him out. Okada grabbed Tanahashi and nailed him with a Rainmaker to KO him. Okada collapsed in exhaustion. It was like the finish of Reservoir Dogs. The timing on all of this was spectacular. All four men were out as the time expired. 30 minute draw. Good match with a great finish. CHAOS celebrated to close the show as “snow” fell from the sky. I was waiting for Balls Mahoney to come out as Xanta Klaus to eat a Boma Ye & Rainmaker. To me, the image of Okada & Nakamura posing together with the belts screamed ‘singles match’ for some point next year. I really hope we get it. ****

Good show to close out a great 2013. Two straight fantastic years for New Japan. Can they top themselves again in 2014, or have we seen the peak? 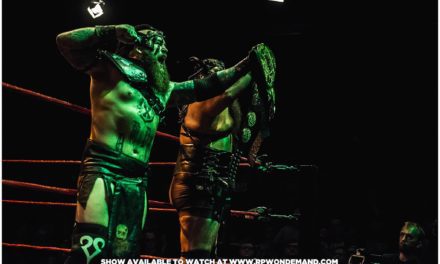