While neither team is expected to win, as it would make very little sense for the champions (KES) to do so, and it appears Satoshi Kojima is headed towards either a NWA World Title shot against Rob Conway or TenKoji towards an NWA World Tag Team Title match vs. Conway & Jax Dane at WrestleKingdom. Both teams are serious threats to at least make the finals. It’s not totally impossible for either team to win, it’s just not very likely.

The key matchup on this night was TenKoji facing one of the tournament favorites, Karl Anderson & Doc Gallows of the Bullet Club. The Bullet Club team entered the night two points behind TenKoji for the Block B lead.

The important match in Block A was the other Bullet Club entry, Prince Devitt & Bad Luck Fale, taking on Shinsuke Nakamura & Tomohiro Ishii. The CHAOS team came in with four points, needing a win to keep pace with Devitt & Fale and KES in the block. A loss would put them in a hole where they would possibly need to sweep the rest of their matches to advance (the top two teams in each block move on to the finals).

This was the second of four total WTL iPPV offerings, with three lower priced $15 shows, and the regular priced major PPV $25 finals on 12/8.

The first show, on 11/23 from Korakuen Hall, had such little interest that we cancelled our usual live Twitter coverage. This show was much of the same. When we took our usual roll call of followers watching the show, we got only one response, plus a retweet from our podcast guest & friend of the site Lance Archer.

This should come as little surprise, as this tour generally gets lost in the shuffle as fans wait (and save money for, since it costs $35) WrestleKingdom. Last year’s WTL final was the least hyped New Japan iPPV of the year, so I didn’t expect these house shows from the tour to do very well. The hardest of the hardcore are going to buy everything, but I don’t think even New Japan themselves expect the rank and file fan to buy all of these shows. It’s still nice to have the option.

1. Yuji Nagata, Sho Tanaka & Yohei Komatsu vs. Toru Yano, Takashi Iizuka & Jado – Nagata is leaving the tour early for his GHC Title shot against KENTA on 12/7, so he’s not part of the tournament. Tanaka & Komatsu are impressive young lions who have had good matches in every match I’ve seen on this tour. This was no different, as they both looked great here. Tanaka was the babyface in peril early, and sold like a champ. Komatsu, as always, showed great fire. Jado hit the GreenKiller, which is an elevated second rope DDT, on Komatsu for the rare Jado pin. I think it’s time to send Tanaka & Komatsu on excursion. These guys are ready. **

2. KUSHIDA & BUSHI vs. Rob Conway & Jax Dane – Non-tournament action for the NWA Tag champs. Dane bullied the juniors early, as they bounced around for him. Key transition spot was a double dive, with KUSHIDA taking out Conway, but Dane catching BUSHI and ramming him into the post. That was a cool spot. KUSHIDA got some shine when he was in, but BUSHI ate a Dane spear & a Conway Ego Trip for the finish. Maybe Jado should have avoided the second rope DDT in the previous match, as it’s similar to the Ego Trip. Dane has looked pretty good on the tour, although there are two similar guys (Strongman & Doc Gallows) on the tour who project themselves a bit better. The Japanese announcers were saying Dane is 25 years old, which was funny, because he’s 32. They were using the incorrect date of birth off of his Japanese wikipedia page. Fun match. **1/4

3. Manabu Nakanishi, Strong Man, Jushin Thunder Liger & Tiger Mask vs. Lance Archer, Davey Boy Smith Jr., TAKA Michinoku & Taichi – It wouldn’t be a New Japan show without a wacky multi-man tag. On a long tour, it must be nice for some of these guys to work a short match where they don’t have to bump as much or take the same type of pounding. Liger is from Fukuoka and got a nice reaction when he tagged in. In a funny spot, Taichi wanted no part of Strongman, but KES wouldn’t tag in. Strongman tossed dudes around like rag dolls. Nakanishi used the torture rack on TAKA for the win. Fast paced & a lot of fun for what it was. **1/2

4.  Hiroshi Tanahashi & Captain New Japan vs. Kazuchika Okada & YOSHI-HASHI – Non-tournament match. As expected, both teams are on the bottom of their respective blocks. Tanahashi must be really hurting, because in all the matches I’ve seen on the tour, he’s been doing very little while Captain New Japan has done a great job busting his ass to make up for it. In situations like this, I really wish they would just give guys the tour off, but that’s just not how things are done in Japan, especially since Tanahashi is a top draw. There was a real buzz for Tanahashi & Okada here, which is probably why they don’t give guys (especially stars) tours off. Hopefully they get to the point that they can sell out these 1,000 seat halls without the top guys, but I don’t expect the mindset to change either way. In this match however, Tanahashi worked real hard. Tanahashi & Okada worked the bulk of the match, and as usual when they work together, this was really good. They’ve gotten to that Flair/Steamboat level where you can see that they know each other so well. This only dragged when YOSHI-HASHI was in, which wasn’t much. CNJ, as noted, has been great on this tour. Okada hit the Rainmaker on CNJ for the win. Okada hit one of the nicest top rope elbow drops he’s ever done earlier in the match. This was very good, well worth a watch. ***1/4

5. World Tag League – Block A: Togi Makabe & Tomoaki Honma (2) vs. Masato Tanaka & Yujiro Takahashi (4) – Honma got cracked in the head with Tanaka’s cane early, leading to a long heat segment. Makabe hot tagged, but was cut off as well. Complete Players controlled the entire match until a Makabe double clothesline. Honma used his falling headbutt onYujiro, then Makabe went up for his King Kong Kneedrop and hit it for the win. Unique match structure here. **

6. World Tag League – Block B: Tetsuya Naito & La Sombra (4) vs. Minoru Suzuki & Shelton Benjamin (4) – La Sombra is jacked, even with the black shirt that he wears and the crowds absolutely love him. He’s been the star of his team, even more so than Naito. Match dragged a bit when Suzuki & Naito were in, but picked up with Sombra & Shelton. At one point, Suzuki had his choke on Naito while Shelton had the ankle lock on Sombra. Sombra used a head scissors but Shelton rolled out and gave him the finger. Sombra then used a wacky looking flying cradle to score the pin. I don’t know what to call it, but it looked great. Suzuki-gun beat up everybody in sight after the match. Shelton’s new thing is going after the ring announcer. Naito made the save. OK match. **1/4

7. World Tag League – Block B: Hiroyoshi Tenzan & Satoshi Kojima (6) vs. Karl Anderson & Doc Gallows (4) – This was shorter than you would think, and fast paced. TenKoji worked over Anderson early. Gallows tagged in and looked like a beast, fighting off double teams and no selling. Bullet Club won this one with the Magic Killer, their double team finish. This meant Block B now had a three way tie on top with these two teams, plus Naito & Sombra. Good, but short. **1/2

8. World Tag League – Block A: Shinsuke Nakamura & Tomohiro Ishii (4) vs. Prince Devitt & Bad Luck Fale (6) – As noted in the open, this was a key match for the CHAOS team, as they could fall 4 behind Bullet Club, and remain behind KES, who don’t figure to lose many more matches. Fale has been beating people like Honma & Yujiro by KO with his overhead Border Toss type move, but he didn’t figure to beat either of these guys in that manner. Devitt & Nakamura squaring off had me thinking about character development.

Not too long ago, Nak was doing what now seems like a dry shooter/super serious king of strong style act, while Devitt was the whitest of white meat babyfaces. Both are light years ahead these days in the personality department. Same for Yujiro, Anderson, KES, and others. Fale & Ishii squared off early, with the underdog trying to take down the giant. Fans ate up the exchanges between Nakamura & Devitt. Things heated up as the match broke down late. Nak survived a dropkick counter to a Boma Ye attempt & reverse Bloody Sunday, and then Devitt kicked out after a second rope Boma Ye. Ishii saved Nak from a Border Toss, which is over a deadly move because the crowd popped for this. With Fale cleared from the ring, Nak lifted Devitt for a fireman’s carry into a suplex from Ishii in a creative spot. Two Boma Ye’s, and Devitt was done. Well structured with Fale looking strong, and a good exciting pace at the end. So we have a three way tie in this block as well, with these two teams plus KES. Second best match on the show. ***

Overall a good show, and I liked this better than the opening night in Korakuen. The best match was Tanahashi & CNJ vs. Okada & YOSHI-HASHI, which had a somewhat surprising long exchange between Tanahashi & Okada, plus CNJ continues to surprise on this tour. Main event was a good match as well. The rest was all solid, with nothing bad or a waste of time.

Special thanks to @SenorLARIATO for the gifs. Order a replay to show below: 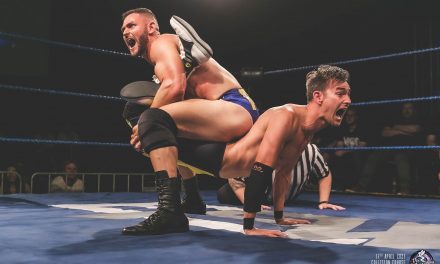