The Power is yours! For the firs time ever, the top promotion in Japan is letting you and I chose the main event for WrestleKingdom 8. No, no, this isn’t like WWE Cyber Sunday, the matches are already set but NJPW is letting their fans chose the order of their main events.

WrestleKingdom 8 (January 4, 2014) is the biggest yearly event for NJPW and this year’s iteration may be the biggest ever with the allure of the aforementioned  double-main event.

Here’s where things get interesting and where you and I come into play. The New Japan office, more specifically NJPW bookers Gedo and Jado, listened to the Osaka fans this weekend at NJPW Power Struggle and realize there may be some backlash to closing out their biggest show of the year with Naito.

If you don’t know what I’m talking about, here’s what happened.  Naito defended his NEVER Openweight Championship Saturday against Masato Tanaka but as our very own Joe Lanza pointed out in his review of Saturday’s show, the Osaka crowd was not in Naito’s  corner:

Crowd wasn’t really into it, but a small Naito chant broke out…The crowd was flat for the finishing stretch, aside for the Sliding D kickout. This was a good match, the majority of which was taken by Tanaka again with a shocking lack of crowd heat.

A match without much heat isn’t a big deal, the issue, however, came later in the night as NJPW teased the Okada/Naito WrestleKingdom 8 main event.

Fans knew after Naito won the G1 in August that he’d be challenging someone for the championship. He had been defending the #1 contendership against the likes of Yujiro and Tanaka, but it was never in doubt. Okada, on the other hand, had been defending the title on various shows including an unpredictable battle against Tanahashi on October’s NJPW King of Pro Wrestling iPPV.

Once Okada retained over his only legitimate contender in Tanahashi, it was clear we would get Okada vs. Naito at WrestleKingdom. However, due to Saturday’s matchup with Karl Anderson NJPW couldn’t formally announce Okada/Naito for The Dome. Once Okada defeated “Machine Gun” handily the stage was set and that’s when Gedo and Jado got the reaction they weren’t looking for:

Naito came out (post-match) to hype Dome, and he got ZERO reaction, aside from a smattering of boos. It was scary. He spoke and was booed yet again. Then they did dueling poses and they booed him a third time.

Uh-oh. It’s safe to say this is not the reaction NJPW was hoping for, even more surprisingly given his match with Tanaka was about as babyface as a wrestler can get. From bleeding all over the ring to taking a majority of the punishment and continuing to fight back, this was clearly a match set up to get sympathy and momentum behind Naito. It didn’t work. Not unlike John Cena’s backlash in “smarky” American cities, the Osaka crowd denied the force-fed babyface and responded with boos the likes Naito has never heard.

Fearing a flat finish to their biggest event of the year, New Japan set up a poll (http://www.tv-asahi.co.jp/wrestling/pc/info/131111/index.html) to vote on the order of their main event or as they stated in their official press release “what is an appropriate end to the Tokyo Dome show.”

The very fact that there is this option at all is extremely interesting but it doesn’t mean the IC Title will undoubtably win,  Okada is the second biggest star in the company and his match with Naito is for the world title, that means a lot. NJPW could just be testing the waters to see if Osaka’s Naito backlash is felt across the country and abroad. I suspect, it’s not, but that remains to be seen.

Moreover, their match won’t be bad, this isn’t like picking between two superstars and two geeks, Okada vs. Naito could be a Match of the Year contender and could blow the roof off the Tokyo Dome. Regardless, it will be an interesting debate leading up to December.

For reference, the last time the IWGP Heavyweight Championship wasn’t in the main event of the January 4 Dome Show was 2007 when Masahiro Chono/Keiji Mutoh vs. Satoshi Kojima/Hiroyoshi Tenzan got top billing over Hiroshi Tanahashi (then champion) vs. Taiyo Kea.

Before 2007, we have to go all the way back to 1994 when the then-Wrestling World 1994 event was headlined by Genichiro Tenryu vs. Antonio Inoki as opposed to the IWGP Heavyweight Championship Match between Shinya Hashimoto and Masahiro Chono.

(Wrestling World 2002 did not feature an IWGP Heavyweight Championship match instead the GHC Heavyweight Title was defended in the main event with Jun Akiyama defeating Yuji Nagata).

If you’re a New Japan fan, make sure to head over and make your voice heard. When you’re done voting, let us know who you picked through Twitter (@VoicesWrestling) or in the comments section below. 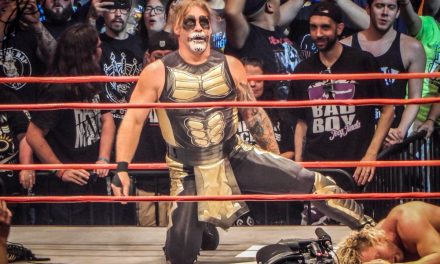