WWE announced 3rd Quarter earnings yesterday morning and their focus is clearly on their upcoming TV Rights negotiations (both domestic and international) and they are projecting confidence at being able to substantially increase their rates (there were numerous comparisons to NASCAR which just signed a lucrative deal).

WWE emphatically stated they believed they have their new domestic deal TV rights deal for RAW/Smackdown completed by April.  That would be well before the contracts end in Q4 2014 (September/October).  Again, there was nothing important said about the WWE Network launch which makes early next year seem extremely unlikely to me. 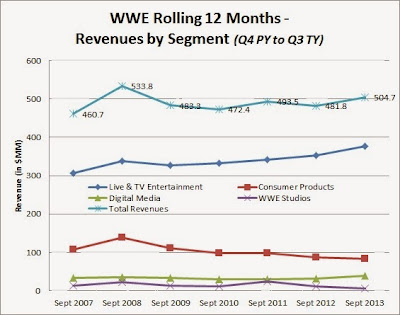 Digital Media (WWE.com/WWEShop) is pretty much flat and WWE Studios has been declining in revenue.

The trends have been pretty clear – the engine of growth has been TV Rights Fees.  Q3 2013 TV Rights Fees were up $10 million alone versus Q3 2013 because of TV rights fee increases along with additions of Main Event (ION) and Total Divas (E!) programming.  Considering their viewership, should WWE succeed in their negotiations they are posed to capitalize on majorincrease on TV Rights. Clearly, this is coming at an opportune time since Pay-per-view (which was very similar in size to TV Rights six years ago) continues to fall (it is worth noting how they’ve scaled back the PPV schedule to just 13 events a year).  With WWE’s stated strategy of moving the non-Wrestlemania PPVs to their hypothetical premium channel (WWE Network), it’s clear they are not prioritizing PPV revenue as Live & Televised Entertianment’s long-term primary driver.  In today’s call, WWE did tout how they’ve expanded PPV access to include XBOX360 and PS3 systems in 2013 so they really aren’t just in a holding pattern.  Plus, at $80 million annually, PPV is still the third largest revenue stream for the company (behind TV Rights Fees and Live Events).  PPV is essentially equal to the entirety of the diminishing consumer products segment.

Let’s dig a bit deeper into the $110 million revenue stream for Live Events. 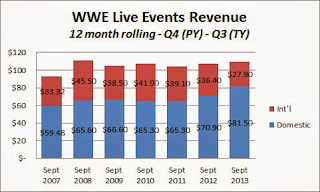 Noticeably, these past 12 months have represented a considerable decrease in International Live Events revenue (which was driven by the simple fact they simply ran few international events). 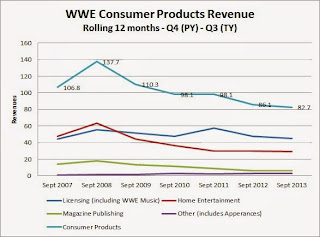 Consumer Products has not been a growing segment.  Home entertainment continues to decline, almost at a rate of $5 million a year.  Magazine publishing was dropping almost 1.8 million a year – the past 24 months have flatten out around $6 million dollars.  It will be interesting to see how many more years they continue the magazine strategy – with all of the emphasis on the WWE App, I wonder if a digital move is looming sometime in the future. Licensing has been fluctuating between $45 million and $55 million; it’s inconsistent.  The licensing portion of their business isn’t dying – but it’s just not steadily growing either.

An unusual dynamic emerging in 2013 is the growing share of revenue coming from North American markets.  (This is tied to the decreased number of international live events.)  Previously, 35%-40% of the revenue had come from the Europe/Middle East/Africa/Asia Pacific/Latin American marketplace, but this year that number has dropped to 30%. 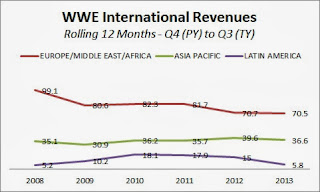 Revenue from Europe/Middle East/Africa has decreased significantly over the past five years almost at the rate of dropping $5 million a year though it has settled in the past two year around $70 million.  Meanwhile, Asia Pacific is slowly climbing (about a million a year); Latin America seems to be an area that has changed focus over time.  While I don’t have 2013 numbers, but I know that United Kingdom revenue in particular has steadied at about $33-$36 million a year from 2009-2012 but that was down from the recent 2008 peak of over $47.3 million.

What a very weird ending to the conference call. There was only a single caller who asked about domestic rights renewal and WWE’s cryptic statement about a fail-safe restructuring “if things don’t work out.” After the caller finished there was silence and no one else asked questions. So they just said, “Goodbye”.  Last thing you heard Vince trailing off with (and I’m not making this up) “As Daniel Bryan would say…” and then they disconnected.

They’re touting a big 15.1 million weekly viewers number so they can sound really important going into the TV rights renewal process; no doubt this number is carefully crafted by adding together all of the viewers of different shows (especially Total Divas) in some goofy way. They did a lot of stressing about how they were like NASCAR because NASCAR recently signed a huge money deal. It was normal talking points about being Sports/DVR-proof programming.

They neither played up or down the possibility of the WWE Network. They threw out the vague references to how it could be traditional, cable, cell networks – and of course they’re exploring all options. I didn’t hear any kind of clear dates or new developing thoughts.

In regards to their major television contracts (both domestically and internationally – with UK & India being of special important), they said they expected to have things finalized by April 2014 even though the contracts don’t expire until Q4 2014.

They played up how great Total Divas did and of course used goofy metrics like the improvement in the timeslot over the former programming (who knows what that was).

They noted that exchange rates variance and “economic weakness” in places like South Africa hurt some of the non-domestic revenue streams.

They are taking another $7M film impairment charge though they kept emphasizing that this was related to 2010-2012 activity and doesn’t represent their current distribution model which they felt under the new model (starting with the re-release of No Holds Barred) they would eclipse the cost of capital and generate a 13% rate of return on new WWE Film projects. I got the sense that they continue to push the WWE Films as a portfolio rather than a project-by-project basis, so I think the entire project is up for a review sometime in the next 12 months but they didn’t outright say that.

They mentioned that both XBOX (April?) and PS3 (August?) came online for selling PPVs and I think they even through a number of how many PPVs had been sold via PS3. I didn’t write it down and haven’t seen in the talking points elsewhere, but I think it was a few hundred thousand. Hopefully Seeking Alpha has the transcript up in a few days to check on that.

Regarding how they revised down expectations recently, there was talk about how expect this business should vary between $50M and $100M in OBIDA annually with a $75M as a good mid-point. For perspective, 2011 was $52M, 2012 was $63.2M and 2013 is $35.9M for 9 months (and I think $40M was this year’s revised estimate). So they feel that this year is down and they’ve been hovering at the low end of their targets. Of course, it’s always sunny days are ahead with references that once they can get this and that in place (WWE Network, new Film distribution model, new TV Rights contracts, etc.) it’s going to be much higher within a few years — we’ll see!

You can read all of my statistical work on http://indeedwrestling.blogspot.com and follow me on Twitter@mookieghana. Lastly, don’t forget to purchase my upcoming book(s) “Wrestlenomics” by emailing me at[email protected] for details on pricing and delivery options. 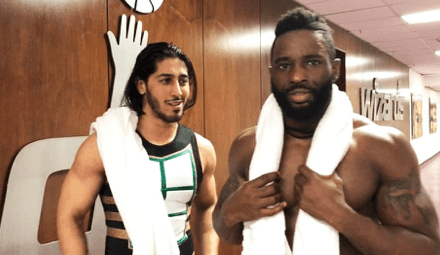 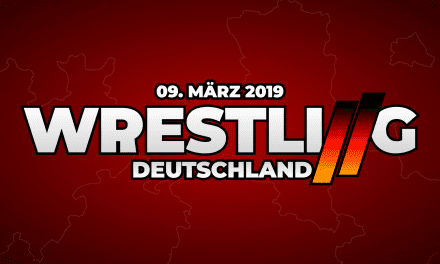