Wrestlers Age vs Star Ratings: Who has the brightest future?

Responding to the recently updated “Wrestling Observer Star Ratings for WWE/WCW/ECW/ROH/TNA” someone inquired “who, from the list, is the most likely (or at least possible) person to dethrone Chris Benoit’s 182 matches with 3+ star ratings?”

(Also, keep in mind that this list is only looking at ROH/TNA/ECW/WCW/WWF – so Benoit’s Japanese and Mexico matches aren’t even included.)

Here’s one way of answering that question that I was thinking about: let’s look at the distribution of stars by age of performers in the match.

I took the 600 performers from the database and ran them against a list of wrestler birthdates. I filled in the gaps for any wrestlers that had seven or more matches already rated and in total my sample covers almost 60% of the wrestlers. 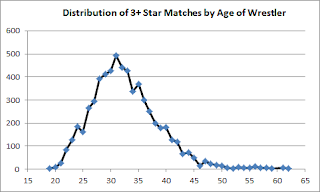 Expressed as a smooth curve, the distribution of lifetime star rated matches versus wrestler’s age would look something like this: 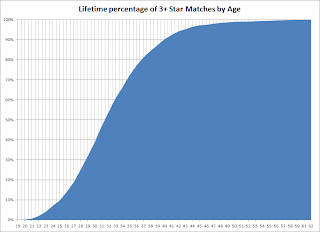 Now, there is some bias in this methodology that you might start to notice. For instance, this implies that wrestlers will achieve almost 13% of their lifetime total after they’ve passed their 40th birthday. When you look at the roster of people who had 3+ star matches after they were “over the hill”, it contains some pretty great workers – Ric Flair (93 times), Shawn Michaels (45 times), Kurt Angle (43 times), Diamond Dallas Page (32 times), Undertaker (31 times), Sting (25 times), Booker T (24 times), Finlay (22 times), Kane (21 times), Christopher Daniels (17 times), Terry Funk (16 times) and Triple H (15 times).

Now, to still be employed and on TV by a major North American non-lucha wrestling company after the age of forty, you’ve got to have a pretty darn good and able to avoid career-ending injury. There’s already several wrestlers on this list who have high lifetime potential but retired (Edge, Billy Kidman or Nigel McGuinness) or passed away (Eddy Guerrero, Brian Pillman, Owen Hart, Davey Boy Smith, Umaga) before they reached forty.

It’s very possible that a different metric – lifetime number of matches, number of years of experience, quality of opponent matchups – will drive this number much more. But I went with age because I had that variable available.

Still, this analysis provides an interesting look at both “what could have been” for wrestlers that have died, or “what may still be” for younger wrestlers.

The basic formula is look up a Wrestler’s age as of today, determine what, on average the proportion of star-rated matches that a wrestler has achieved in their career by that point, and estimate the lifetime rating. For a wrestler who has not yet turned 33 who has 10 matches already listed, the formula would predict they’ve already achieved about 59% of their lifetime total. They’ll have about 7 more three-star-plus matches before their career is over.

So, let’s look at the top twenty from the list and consider whether we think they’ll achieve the statistical norms:

Obviously, we can’t really know what Eddy & Chris would have achieved.

I think the estimates for the likes of Kurt Angle and Christopher Daniels are low– I think they’ll have a dozen more really great matches before they retire.

I think the estimates for Rey Mysterio, Edge, Christian, and Rock are too high; Rey seems way to broken down to have another twenty 3+ star affairs. Edge is not coming back in the foreseeable future, and if he did, it would be a one-time shot – not more than a dozen matches. Rock is making too much money in Hollywood and getting too beat up from wrestling to have five more huge, 3+ star matches in my opinion. Christian is slowing down and I think he’ll have some more big matches, but not nearly a dozen more.

Some estimates feel alright – I don’t see Sting having another barn-burner. I think Undertaker has one or two mega-matches left in him. Austin could have one big final hurrah. I could even see that if HBK came back (retire HHH or such), he’d pull out all the stops to have at least one more amazing battle.

When it comes to guys with decent futures – Randy Orton, AJ Styles, Cena, Hardy, Samoa Joe – it predicts they’ve got several dozen more great matches in them, and I don’t doubt it.

When it comes to the young, like Chris Sabin and his 50+ future match projection – it’s so hard to guess the future. Other guys in a similar place: Chris Sabin, Alex Shelley, Jay Lethal, Sonjay Dutt, Roderick Strong, Davey Richards, Cody Rhodes, Jay Briscoe, Kevin Steen, Mark Briscoe, Evan Bourne, Eddie Edwards, Jack Swagger, Seth Rollins, Amazing Red, Jimmy Jacobs, Consequences Creed, El Generico, Adam Cole are all under 32 years old and already have 10+ matches on the list. The youngster, Adam Cole at 24.2 is at a ridiculous 7% lifetime total which would imply over a 132 future matches. That’s a ridiculous claim to guess a lifetime number for a young kid in ROH. Jay Lethal, Alex Shelley and Cody Rhodes are all between 28 and 30 right now; they still have quite a very bright future.

Who has the track record to ascend the list? The analysis calls out these guys who are over the age of 32, and all have 19+ matches already on the list: Randy Orton, AJ Styles, John Cena, Jeff Hardy, Samoa Joe, James Storm, CM Punk, Daniel Bryan, John Morrison, Austin Aries, Dolph Ziggler, Low Ki, Kofi Kingston, and even Mike Mizanin & Petey Williams (what a tag team!). Personally, I think Bryan is in the upper-echelon that will be able to have great matches with a lot of people for a long time to come. Punk is in that group too, but I think he’s starting to break down and get frustrated, and so I don’t know whether we’ll see him in WWE in 5 years from now or not.

Honestly, I think the model suggests that Orton could hit 150 and I think that estimate is low. Barring the dreaded third strike, he’s got an enormous opportunity to be the highest ranked active guy after Angle retires (who knows when that will be) and Rey Mysterio officially admits its over.

You can read all of my statistical work on http://indeedwrestling.blogspot.com and follow me on Twitter @mookieghana. Lastly, don’t forget to purchase my upcoming book “Wrestlenomics” by emailing me at [email protected] for details on pricing and delivery options. 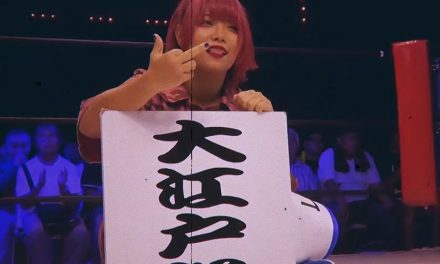