The second of three September New Japan iPPV’s, titled “Road to Destruction” (the same title as the previous iPPV this month, and held in the same building, Korakuen Hall), was essentially the equivalent of a go home RAW.

Angle heavy by New Japan standards, the first half of the show was completely forgettable, aside from a spirited effort from the young lion team of Shohei Komatsu & Sho Tanaka. Paint by numbers action, mostly designed to set up matches for the “Destruction” iPPV on 9/29.

The second half picked up a bit, with an intense CHOAS vs Suzuki-Gun tag match that sets up two singles bouts on the 29th, a wild CMLL World Tag Team title match, and a solid main event which featured IWGP champ Kazuchika Okada squaring off with both his next title challenger (Satoshi Kojima) & his likely WrestleKingdom challenger (Tetsuya Naito), assuming Naito gets past Masato Tanaka on the 29th, and assuming Okada survives as champion until 1/4 (both being very likely to occur).

I preferred the first “Road to Destruction” show on 9/5 to this one, because even though the overall match quality was probably lower, I found that show to be a lot of fun, thanks to two Survivor Series style elimination bouts. This show wasn’t terrible by any means, it was just squarely average. But with that said, if you understand the New Japan booking pattern, you had to figure it would be. If you are a regular New Japan viewer, this show is largely skippable, unless you want to see the CMLL title match or want to catch the last minute angles leading into the big show on the 29th.

1. Sho Tanaka & Yohei Komatsu vs. TAKA Michinoku & Taichi – Tanaka & Komatsu lost a spirited effort to the Time Splitters on the 5th, and this was much of the same. The heels worked over Komatsu’s bad leg for the meat of the match, and he sold like he was dying. He was nothing short of tremendous and was the standout of the match. TAKA is really comfortable in his role these days, and he really takes charge of these types of matches very well, sprinkling in just enough comedy to where it’s not overkill. Taichi finished off Komatsu with a sit out powerbomb. Solid match, best of the first half. **3/4

2. Tiger Mask & BUSHI vs. KUSHIDA & Alex Shelley – This was disappointing, and surprisingly it had nothing to do with Tiger Mask, who was fine. In fact, he was probably the best overall performer in the match. This just never came together. There was nothing wrong with it, it just never hit that next gear that you expect a junior tag to hit. The Splitters did all of their key stuff and finished off BUSHI with a dragon sleeper/moonsault combo. Just OK, and really all about the post match, where TAKA & Taichi jumped the Splitters from behind to set up a match on 9/29. Based on KUSHIDA’s promo, it looks like the winners of that match will face Forever Hooligans for the titles. **1/4

3. Yuji Nagata, Manabu Nakanishi & Takaaki Watanabe vs. Takashi Iizuka, Yujiro Takahashi & YOSHI-HASHI – This match did absolutely nothing for me. Wild brawling at the start, with Iizuka attacking Hiroyoshi Tenzan at the broadcast table again like he did on the 5th. Watanabe busted open Yujiro’s mouth with a forearm strike. Yujiro used the Tokyo Pimps to beat Watanabe. Totally skippable. **

4. Togi Makabe, Tomoaki Honma & Captain New Japan vs. Prince Devitt, Karl Anderson & Bad Luck Fale – Another nothing match. Tenzan cut a promo that took forever before things got started. The only thing notable here is that Captain New Japan didn’t take the pin for once, as Honma ate ALL OF THE FINISHERS and took the loss. Move along. **

Intermission. This show was flying along.

5. Shinsuke Nakamura & Toru Yano vs. Minoru Suzuki & Shelton Benjamin – This wasn’t a match, it was more of an angle. Suzuki wants to basically kill Yano. At one point, Suzuki set up the Gotch Piledriver on Nakamura, but Yano broke it up by pouring water on his head. I chuckled. Yano is great at being a sneaky asshole, and Suzuki is the perfect foil as the no nonsense bad ass who wants to murder him.

Suzuki eventually lost his cool, tossed the ref,  locked a choke on Yano and wouldn’t let go. So Yano & Nak won by DQ, but both were left laying. TAKA & Taichi tried to pull Suzuki off of Yano, but Suzuki was hot and ran them off. Then he stormed off to the back. In the ring, Shelton taunted Nak with the IC belt, and laid it on his prone body while talking trash to set up the semi main on 9/29. The match wasn’t much of anything, but the angles & post match shenanigans were good. ** for the match, add another * for the other stuff.

6. CMLL World Tag Team Title: Hiroshi Tanahashi & Jushin Thunder Liger (c) vs. Tama Tonga & Rey Bucanero – The entire Bullet Club was at ringside. This was tons of fun. Bucanero kept trying to unmask Liger. They worked over Tanahashi’s back for the heat segment. Down the stretch Tanahashi got Bucanero isolated, hit the slingshot lariat, but missed the High Fly Flow. Bucanero got a two count with a la magistral, and then used a reverse figure four, but Liger broke it up.

Later, Liger hit a running power bomb on Tonga, but Fale yanked the ref out of the ring right before the three count. Bullet Club ran in, but Liger fought them all off one by one with palm strikes. That was very awesome. Anderson came out of nowhere with stun guns for both Liger & Tanahashi, and Tonga used a guillotine DDT on Liger for the pin to win the titles. Makabe & Captain New Japan made the save on the post match beatdown. Good match. ***

7. Satoshi Kojima & Tetsuya Naito vs. Kazuchika Okada & Masato Tanaka – This was the best match of the night, with a great closing stretch. I thought they did a good job making Naito look impotent against Okada, keeping the focus on Kojima’s challenge. One spot in particular emphasized this, as Naito broke up a tombstone attempt, and Okada killed him with his high dropkick for his trouble. This cleared the ring for the finish. Kojima countered a Rainmaker with a lariat to the back of the head, then hit a second HUGE lariat for the pin. You can bet they will work that spot into the match on the 29th. Okada was great here, as was Kojima. I thought it was very important that they work the match in that manner, so people don’t jump ahead to Okada/Naito just yet. Probably the only match worth seeking out from the show. ***1/2

Special thanks once again to @SenorLARIATO for the gifs. 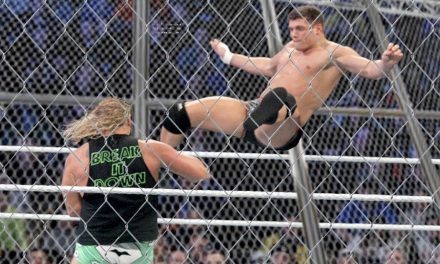