Once again, from American Legion #308 in Reseda, California, Pro Wrestling Guerilla presents their tenth anniversary show TEN. As usual, Excalibur and his cast of characters are back on commentary.

Tonight, Joey Ryan returns and Anthony Nese debuts.  Also, will Adam Cole and The Young Bucks get their comeuppance?  Let’s find out!

This is the return of Joey Ryan to PWG after a nondescript run in TNA. For those that have followed PWG, you’ll know this match is going to be an attempt to give an homage to the Joey Ryan/Candice LeRae terri-feud and Ryan and LeRae would be highlighted…and they were (along with Willie Mack).  A few fun spots in this match, mostly featuring one of the aforementioned three.  Also, watch out for the dancing Asian guy on the front row, hard camera side.  Lulz. Willie Mack will eventually pin Pretty Peter with the Chocolate Thunder Driver for the win.  It was ok, it got the crowd up and would have been fun if you were there, and served its purpose.  Sometimes in PWG, “you gotta be there” to enjoy a match for what is supposed to be and it’s tough to appreciate from your living room and this was one of them.  **1/2

Brain Cage v. Anthony Nese
Dammit man, Brian Cage still has shades of that Red Rooster faux hawk going on.  This, I do believe is Tony Nese’s debut in PWG. This is one of those matches you know exactly what you’ll be getting — two top tier athletes with a display of athleticism and power moves. It starts off pretty sloppy and it’s pretty clunky all the way through.   Still, they get their shit in.  There are some cool spots.  Cage wins with the Weapon X.  **

Forever Hooligans v. The RockNES Monsters
The crowd is pretty hype to see the Hooligans come to PWG. The IWGP Junior HW Tag Champs / ROH Tag Champs are a pretty hot commodity in their stateside tour.  Johnny Yuma with a haircut, too.  This one has a ton of comedy in it.  The go-home got pretty serious though. They had the Monsters get a ton of offense in.  Hooligans with the Contract Killer for the win.  It was ok.  **1/4+

Michael Elgin v. AR Fox
Consider me someone who looked forward to this match.  I don’t expect this to be a psychology display, but it is your token power guy versus flippy bastard faire.  So, there is sure to be a ton of fun shit here.  This one starts off with both guys just getting some of their stuff in, but about mid-way through, it heats up and both guys want to beat the shit out of each other. It’s matches like this where you can fully appreciate how good a guy like Michael Elgin is because he’s not just your token power guy.  He’s capable of working a ton of different styles and working with a variety of guys and having good to great matches.  There is an awesome spot here (among many) where Elgin catches Fox doing his corner shooting star press, deadlifts him, and buckle bombs him in the corner.  This will lead to Elgin hitting a sit down power bomb from the top fucking rope for the win.  Really good.  ***3/4

Chuck Taylor / Johnny Gargano v. Brian Kendrick / Paul London
Truth be told, I’m not a huge Kendrick or London fan at this point.  I find their matches to be typically pretty uninspiring.  That isn’t to say they don’t have one or two here and there that come through for me though.  This is one of them.  This match starts off with Gargano and Kendrick in a chicken fight.  Hilarious.  There is some comedy early on here, but the last five minutes or so get pretty intense.  Taylor and Gargano reverse Slice Bread #2 on Kendrick and hit their finish.  Pretty good.  Better than usual Kendrick/London stuff of recent vintage.  ***1/4

Kyle O’Reilly v. TJ Perkins
This is a battle of two very distinct styles, so it should be fun.  American Strong Stylez versus the technical prowess of TJP.  O’Reilly has been hot hot hot in PWG this year and was my dark horse pick to win Battle of Los Angeles this year.  TJP usually holds up his end of the match.  This one is put right in front of the double main event.  This one is pretty nondescript, when sandwiched on this card, but it ends up being quite good.  As you’d expect, crisp and fluid as most TJP matches end up being.  Autoparts is the guy to watch here.  The submission aspect of this match really adds the extra layer here.  This is one of those matches that is pretty nondescript, so it holds it back a little bit, but it is a really good match.  Going to be underrated.  ****-

Adam Cole (c) v. Kevin Steen v. Drake Younger
This one is going to be Guerrilla Warfare Rulez!  This is kind of a token conclusion to the year of booking.  Cole took the belt off Steen.  Cole defeats Younger with shenanigans.  Steen has continued to feud with Cole.  So, here we are.  We open up with Cole getting the shit kicked out of him.  The moment he gets the upper hand, Cole goes to sit on a chair, and the chair falls apart.  Lulz.  Some fun spots here.  Lots of insanity.  Cole hits Panama Sunrise onto a table.  Steen pulls Cole out immediate and hits him with an Apron Bomb.  Package Piledriver on Younger through chairs.  Steen hits a BRAINBUSTAH and Cole goes FLYING to the outside.  Steen throws Cole back into the ring.  Younger pulls Steen out, goes for the pin and Cole steals a pin on a reverse on Younger.  Crowd chanting “BULLSHIT!”  Overall, decent Guerilla Warfare match.  ***1/2

The Young Bucks v. Inner City Machine Guns v. DojoBros
This one is a LADDER MATCH.  The tag belts are hanging high in the air.  Match starts out quick.  Tons of group spots, flips out of the ring.  You know, the fun stuff.  Ladders get involves pretty damn quickly.  There are a few normal ladders and then this monster skyscraper ladder (probably a 20-footer) that is higher up than the actual tag belts.  LOL.  This match has your smörgåsbord of huge spots.  The Bucks retain while everyone gets superkicked multiple times.  Pretty bananas.  ****

Next up: PWG The Battle of Los Angeles 2013.  It’s PWG’s biggest event of the year.  Last year, Adam Cole came away the victor and went on to become one of the Indies hottest heels.  Who will emerge this year?  Will it be the favorite, last year’s runner up, Michael Elgin? Will it be the Ultraviolent Golden Boy Drake Younger? Or will my dark horse candidate, the red hot Kyle O’Reilly emerge? Should be fun. 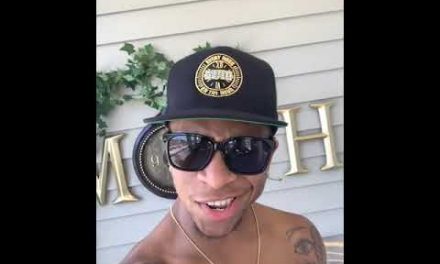