G1 rolled into Sumo Hall for the first of two consecutive nights to wrap up what to this point had already been a legendary tournament. The booking was likely thrown into a frenzy due to the injuries to Hiroyoshi Tenzan & one of the favorites (and points leader of his block when he went down), Hirooki Goto. The first night of Sumo Hall action would set the stage for what i’m sure will be a wild final night.

And if the finals can somehow top this show, New Japan will have produced a total of four Show of the Year contenders, and at least three all time great shows. Just amazing.

0. KUSHIDA & Capt.New Japan vs YOSHI-HASHI & Takashi Iizuka – They added a tag once again to fill out the card due to the injures of Tenzan & Goto. Iizuka did his usual routine and was killing CNJ with chairshots on the outside. KUSHIDA worked hard here. YOSHI-HASHI choked out CNJ with his staff and scored the pin. The heels were putting the boots to the faces when Sakuraba hit the ring and ran them off. That was a nice surprise. Decent opener. **

1. Block A: Davey Boy Smith Jr (8) vs Prince Devitt (8) – This was a key matchup with the logjam at the top, with the loser being all but eliminated. DBS did some power stuff early, until the usual Devitt ref bump. He survuved the chaos, thanks to TAKA diverting Fale, and kicking out of a double stomp with a chair on his chest. Devitt kicked out of a Dragon Suplex at 2.999. Seriously, this was as close as a 2-count can get. Big pop. Davey hit the Killer Bomb for the surprise win. He’s in the mix on the final day. Devitt needs a ton of help to have a chance to win. **3/4

2. Block B: Yujiro Takahashi (8) vs Karl Anderson (8) – Same deal here, with so many guys in Block B with 8 and Nakamura with 10, the loser is all but eliminated. So the miracle Yujiro is over, because he caught a Stun Gun literally out of nowhere as Anderson picked up the win. A nothing match, short with little action. **

3. Block A: Satoshi Kojima (6) vs Lance Archer (4) – Despite both putting in very good performances, but were eliminated no matter what the result. Well, there were wacky tie breaker scenarios for Kojima with a win, but for all intents and purposes, he’s done. Archer had been 2-0, but then lost five in a row. Archer was awesome early, no selling and doing power spots.

Kojima sold and worked from underneath for the meat of the match. Archer did a looooong delayed suplex that would have made his partner’s dad proud. Sumo Hall loved that. He was just pounding away on Kojima and this was a lot of fun. I can not confirm this, but I am of the belief that Archer drops more F-bombs per match than any wrestler on earth. Archer did a FROG SPLASH. Archer blocked one lariat with a big boot, and in a cool spot, avoided another by accident by collapsing in exhaustion. This perplexed Kojima. They ended up battling on the turnbuckle, and Archer hit the Blackout for the win and to eliminate Kojima. What a match. A great beatdown and some cool innovative spots. Go out of your way to see it. ****

4. Block B: Shelton Benjamin (6) vs Toru Yano (6) – Another elimination match, but even the winner is in deep trouble. Benjamin went right after him before the bell, and you got the sense this would be short after the previous bout got a ton of time for its position on the card. Wild crowd brawling early, because Yano. The big transition spot was Yano removing the turnbuckle pad as Shleton charged the corner. Shelton fell for the same spot a few minutes later, which made him look like a complete idiot. They did a ref bump and all hell broke loose. Shelton locked on the ankle lock, which was finally over for the first time all week, and Yano tapped. Yano is eliminated, and Shelton has long odds but is still technically alive. Decent fast paced brawl. **3/4

Intermission. Shibata, despite having the night off, was in his gear and spoke. Does the man own street clothes?

5. Block A: Togi Makabe (8) vs Tomohiro Ishii (6) – The breakout performer of the tournament, Ishii, was already eliminated because this was his final match and others already had 10. This was a god damn war. Not on the level of Ishii/Shibata, but close. I’m not gonna go through the moves. There weren’t many anyway, this was two men clobbering each other.

Makabe hit a dragon suplex for two for the first near fall.Ishii did the kickout at one on a huge lariat, and you have to watch this match if only to see Makabe’s reaction. Priceless. They traded more blows, and Makabe used a HARD double sledge to take Ishii down for good. I cringed, and I generally don’t react that way to wrestling moves. SO STIFF. Makabe hit the King Kong Knee Drop, and that was it. Honestly he should have pinned him after the double sledge. Another awesome Ishii spectacle. They have something with this guy. Not sure what it is, but they have something. ****

6. Block B: Minoru Suzuki (8) vs Kota Ibushi (8) – This was certainly a contrast of styles. I was looking forward to MiSu slapping the prety boy around a bit and seeing how he would react. Suzuki worked the legs, presumably to take away Ibushi’s flying.

Ibushi was selling the hard kicks like he was dying. Ibsuhi sold the leg damage about a million times better than Naito usually does, but still not enough for my liking, flying all over the place on comebacks. I finally got my hard slaps, as a frustrated Suzuki was great here as the old man annoyed at this little shit giving him a hard time. Ibushi didn’t back down.

They has a epic slap fight, going to to toe, and Suzuki put him down with a dropkick. Suzuki at one point was laughing in Ibushi’s face. This was great.

He finally had enough, scooped him up for the Gotch Piledriver, and score the win. Another great match, although the selling of the leg bothered me a little. Ibushi was eliminated with the loss, with no match on the final day. He had a strong showing in the tournament overall, with one MOTY contender, and a couple of other really good bouts. ****

7. Block B: Shinsuke Nakamura (10) vs Tetsuya Naito (6) – Naito needed to win to stay alive. Not much was happening until Naito countered a Boma Ye attempt into a cradle.

Nakamura rolled away from a Stardust Press and hit a kick off the middle turnbuckle. The finishing stretch was hot. Lots of action & reversals, with Nakamura missing a sliding Boma Ye at one point. Crowd was really into this. Naito hit a German for two, a Dragon for two, and then finished him with a Stardust Press. Really picked up towards the end, finishing stretch saved it. ***3/4

8. Block A: Hiroshi Tanahashi vs Kazachika Okada – These two have had four epic matches over the last two years, so this was one of the most anticipated matches of the tournament. They did some mat work early. Tanahashi was getting the better of the highspot exchanges, and working the arm to negate the Rainmaker, which is a common theme when these two face off. Tanahashi got caught showboating on the top rope, and Okada drop kicked him to the floor.

This led to an Okada control period where he worked the neck. Tanahashi eventually regained control and went after Okada’s knee, including a High Fly Flow to the knee and a nice dragon screw. Okada sells damage, particularly leg damage, about a billion times better than Naito. I hate to keep harping on that, but it’s been a theme this entire week. Okada is just way, way better than Naito in every way, despite Naito’s reputation. Anyway, Tanahashi hit a HFF on the outside, then used a Dragon Screw over the middle rope. He then tried a Texas Cloverleaf, but Okada fought it off. Tanahashi was stomping the knee like Ron Garvin, and doing subtle heel mannerisms. He whipped Okada into the ropes, but Okada collapsed on the damaged knee. So good. Strike exchanges, and Okada kept collapsing. I hope Naito was watching. Okada fired himself up, and landed a DDT. Both men were down at this point, and this thing was becoming another classic. Okada did his pose but his Rainmaker attempt was reversed into a German. A hot exchange led to a Okada dropkick being reversed into a dragon screw, into a Texas Cloverleaf. Okada made the ropes. Tanahashi mocked the Rainmaker pose and got booed out of the building. He got tossed out, but skinned the cat and hit the slingblade. Okada rolled out of the way of a HFF, and both men were down. Okada gained control and went into his sequence. Dropkick, set up the Rainmaker, but Tanahashi ducked. A million reversals in about two total seconds, and TANAHASHI landed a Rainmaker.

Holy shit this was some match. Two count on a dragon suplex, Styles Clash, Okada gets the knees up on a High Fly Flow. Okada went for one last desperation Rainmaker, and collapsed on his knee. Time ran out. Draw. Another masterpiece. Five stars. *****

This sounds like a broken record, but another all time show for New Japan. I’ve run out of superlatives to describe what this company is doing. Tanahashi & Okada have surpassed every in ring rivalry ever, with the possible exception of Misawa/Kobashi, in terms of match quality. And all of the matches have taken place over the course of roughly one year. I have no more words for how good these two are together and have no idea how they can ever top this run.

This show was amazing. Do whatever it takes to see it.

Special thanks to @SenorLARIATO for the gifs. 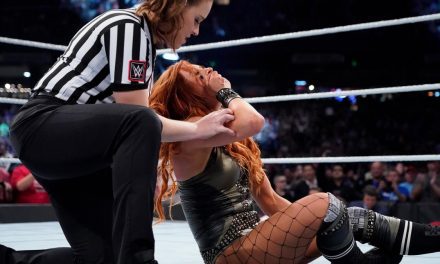