With a solid night one of G1 Climax in the books, New Japan rolled into Tokyo’s Korakuen Hall for night two, in what ended up being a fantastic show loaded with upsets and big stars falling into early 0-2 holes.

Jushin Liger was the guest commentator for the evening, as the stream went live at exactly 4:30 central with no 30 minute preview like they did one night earlier. There were some audio issues early on, but it was sorted out by the second match.

1. B Block: Shelton Benjamin (2) vs Karl Anderson (2) – No MMA gloves on this night for Shelton. So that gimmick lasted one night. Crowd treated Anderson like the heel and Shelton worked babyface. Bullet Club is clearly the biggest heel group, followed by Suzuki-gun, and at this point CHAOS are basically tweeners. This was a total heel/face dynamic, with Shelton making fiery comebacks and getting cut off, appealing to the crowd, etc. Anderson set up the Stun Gun but Shelton hit a superkick followed by a German suplex for a two count. Shelton went for a heel hook, Anderson made the ropes. Anderson tried to roll up Shelton out of the corner, two count, but then hit the Stun Gun out of nowhere for the win. Decent opener. **

2. B Block: Yujiro Takahashi (2) vs Hiroyoshi Tenzan (0) – Yujiro came to the ring with a woman of ill repute. He cut a promo, kissed her, and said “ALLL NIIGGHHT LOOONG!!”. I love this man and I would be perfectly ok with him shocking the world and winning the whole thing.

First big move was a Yujiro tope, at which point he took control. Tenzan hit a lariat out of the corner and did his chops. It was obvious at this point to me that Tenzan in general was probably going to have the weakest matches of the tournament, but we kind of knew that coming in. Tenzan got a two count on a diving headbutt, and locked in the Anaconda Vice. Yujiro broke it up with an old fashioned EYE RAKE. Tenzan missed a moonsault, ate a boot to the face, and escaped the Tokyo Pimps. Yujiro hit a moonsault of his own, but only got a one count. He couldn’t lift Tenzan for the Tokyo Pimps, which was either a cool touch or a shoot requiring an audible, so he hit a second moonsault for the win. Then he molested the girl and celebrated his four-point start. Match ended up better than it had any right to be. Yujiro is very underrated. ***

3. B Block: Toru Yano (0) vs Yuji Nagata (2) – Wild brawling at the start. They went to the outside, and Yano found a chair. He tossed Nagata in and took control for the meat of the match. Yano isn’t my favorite, but there are times when he’s awesome and his stuff works, and this was one of those times. Low blows, cheap shots, grabbing the ref, etc. It wasn’t enough, as Nagata hit the backdrop driver for the win. Nagata off to a hot start with four points. **3/4

4. A Block: Lance Archer (2) vs Prince Devitt (2) – This is the type of match that a junior would have never won in Japan for many many years. Archer was tossing around Devitt like a rag doll, until Fale’s distraction allowed Devitt to clip the knee. Devitt worked over the legs and screamed “CHOPPING DOWN THE BIG TREEE!”.

Archer was finally able to overhead press Devitt the outside into Fale. Big reaction for that. In a cool spot, the ref took away a chair from Devitt, so Fale simply handed him another one. Archer punched the chair into Devitt’s head, to an enormous pop. Crowd was chanting Archer’s name. Ref bump.  Archer laid the chair on Devitt’s chest and missed a moonsault. Devitt hit a double stomp with the chair on Archer’s chest, two count. Devitt couldn’t lift him for the Bloody Sunday. Devitt kicked out of a chokeslam at two. Fale tried to get in the ring, but TAKA grabbed his leg, and Archer clotheslined him out. Devitt tried a cross body off the top, got caught, Archer hit the Blackout for the somewhat shocking win. This was a lot of fun. Archer was great here. Amazing how far he’s come. This was only Devitt’s second loss since the heel turn. ***1/4

5. B Block: Katsuyori Shibata (2) vs Satoshi Kojima (2) – Shibata worked a figure four early, with Kojima working to reverse. Some intense kicks from Shibata, and he took Kojima to the outside for a suplex on the floor. Shibata was really bullying him here. Kojima clipped the leg and took control. Crowd was way into all of this.

Shibata went for the PK kick and whiffed. Kojima hit a big lariat, then another, for the HUGE win. The second one nearly took his head off. Crowd went absolutely bonkers…but then the sound cut off for Kojima’s music. Awful. Shibata took off for the back like Forrest Griffin. Pretty awesome match. ***1/4

Intermission. Tonight, all we got was a generic G1 Climax graphic, no interviews or promos.

6. A Block: Davey Boy Smith Jr (0) vs Togi Makabe (2) – This match didn’t work for me. The big spots were DBS kicking Makabe in to the front row early, and a top rope superplex by DBS. Davey hit a sit out powerbomb for the win. There was nothing wrong with this, it just never clicked for me or went to the next level. Liger said in commentary that DBS may be better now than his father. **

7. B Block: Kota Ibushi (2) vs Tetsuya Naito (0) – It sure looked like the crowd went nuts for Ibushi, but the sound was off. Crowd is hyped for this. I believe this is a first time match. Ibushi did his quebrada off the turnbuckle post and the place went nuts. He then did all of his key stuff…springboard dropkick, standing shooting star, etc.

Naito took control by going after the knee, and I heard some scant booing, which is interesting. He locked on a figure four, and the crowd was solidly behind the Kota escape. Naito hit a German for a two count, and held on for a dragon suplex. Ibushi reversed, hit his own dragon, and both men were out. Naito got two quick near falls, before eating a crescent kick. Two count on an Ibushi Last Ride powerbomb. Phoenix Splash, 1-2-3. Whoa, what a match this was. A bit surprising to me how solidly behind Kota the Korakuen crowd was. ***1/2

8. B Block: Minoru Suzuki (0) vs Shinsuke Nakamura (0) – This began the string of three matches with six top guys with no points. These two hadn’t faced each other since the 2011 G1. Back & forth match, with Nakamura focusing on the arm. I was surprised how much Nakamura dominated. Suzuki locked on a choke late, Nakamura did a beautiful counter into a cross arm breaker, which Suzuki then countered into a Gotch Piledriver for the win. Well paced. ***

9. A Block: Kazuchika Okada (0) vs Hirooki Goto (0) – Okada came out first. Goto controlled early, but the crowd was solidly behind Okada. Okada took control with a DDT off the railing on the outside. They teased a count out that exactly zero people bought. Back & forth until Okada hit his top rope elbow and locked on Red Ink. Goto made the ropes. Goto ducked one Rainmaker, and used a stiff HEAD BUTT to counter another. Amazing. Goto took Okada to the tope rope, delivered a Samoan Drop, then hit the Shouten for the win. Wow. ***1/4

10. A Block: Tomohiro Ishii (0) vs Hiroshi Tanahashi (0) – Captain New Japan cornered Tanahashi. Good thing Tanahashi isn’t facing the Bullet Club. First big spot was a powerslam on the outside by Ishii. That can’t be good for Tanahashi’s bad back. Tanahashi was working subtle heel here, which is the way to go in a match vs Ishii, because they’re going to rally behind him regardless. Korakuen flat out booing Tanahashi’s offense. This was great. I typed up a looong move by move play by play, but unfortunately our site crashed and i’m not doing it again. Just seek this match out and watch it. A ton of great stuff, with Korakuen going apeshit for Ishii and ready to explode for the upset. Multiple 2.9 kickouts by Tanahashi, and some crazy reversals. At one point, Tanahashi went up for a High Fly Flow, Ishii caught him on the top, and superplexed him, causing Liger to scream “Woooooo!!”.

Ishii won it when he dropped Tanahashi on his head with some sort of vertical drop sit out piledriver like maneuver. I’ll let the gifs speak for themselves. Just a great match with amazing heat. ****1/4

This was the night of upsets and big stars taking losses, with Devitt, Shibata, Makabe, Naito, Nakamura, Okada, & Tanahashi going down. A great show well worth seeking out.

Yujiro picks up the win over Tenzan

Goto ragdolls the champ on the way to a big win 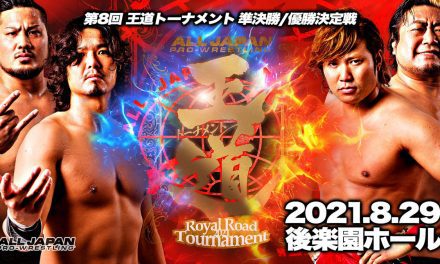