It wasn’t all that long ago that those of us outside of Japan had to wait many weeks, if not months, to get their hands on Dragon Gate PPV’s.

That’s assuming the shows would emerge at all. Of all the major promotions in Japan, Dragon Gate, more than any other, always seemed to be the hardest to come by when it came to getting your hands on shows through whatever your favorite illegal method happened to be.

No more. After dipping their toes in the water last month with a taped delayed version of ‘Dead or Alive’, and then offering up a live iPPV broadcast of an Infinity episode earlier this month, Dragon Gate has now jumped head first into the iPPV game. ‘Kobe World’, or just plain ‘World’ as the long time fans refer to it, was the first major Dragon Gate show to be broadcast on worldwide live iPPV. And for a longtime Dragon Gate fan like me, who had missed his share of Dragon Gate shows over the years because they simply never emerged, watching World live in my living room on my 50″ TV was a surreal experience.

The show itself saw all titles defended, headlined by CIMA defending the Open the Dream Gate title against Shingo Takagi. CIMA won the title from Masaaki Mochizuki at ‘Final Gate’ back in December of 2011, since crushing records for both longest title reign (nearly 18 months) and most title defenses (15). He is the only man to hold the title three times, and during this most current run, he defeated nearly every major player on the roster in raking up his record number of defenses.

Shingo came into the match on a winning streak, capped off by a dominant win over Mad Blankey unit leader Akira Tozawa at Korakuen Hall on the last iPPV. Shingo himself is a former champion, having won the the title by beating BB Hulk after CIMA was forced to vacate due to injury on his second title run. Adding to the intrigue of this match, Shingo had also never defeated CIMA in a singles match (0-4).

The show itself was very good, with nothing below three stars (aside from a comedy match that I chose not to rate). Dragon Gate typically pulls out all of the stops for their big shows, and World is the biggest show of them all. This show was stronger than Dead or Alive, thanks to a historical main event and an absolute classic Open the Twin Gate match that will challenge for worldwide Match of the Year.

1. Super Shisha, Shachihoko BOY, Rich Swann vs. Kotoko, Super Shenlong III, Chihiro Tominaga – Fast paced opener that saw Swann pin Tominaga with a standing 450. Well paced and as good as you are going to get in a 7:00 match. ***

2. Hollywood Stalker Ichikawa 10 Match Submission Series: Yoshiaki Fujiwara vs. Hollywood Stalker Ichikawa – Stalker is the Dragon Gate comedy figure/mascot. Fujiwara is the star from another era who has an armbar named after him. Fujiwara tapped out Stalker so fast, that the iPPV broadcast missed the entire match while the feed switched from the free preshow to the pay window portion. It was restarted, and they did a few minutes of comedy until Fujiwara tapped him again, using a…well, you figure it out. NR

5. Open the Brave Gate Title: Masato Yoshino (c) vs. K-ness – The back story here, was these two had a feud nearly ten years ago. They’ve been kept apart ever since. Yoshino was wearing the colors from the Italian flag, a nod to his former affiliation with the Italian Connection unit, which he was a part of when these two men last faced each other. K-ness had a bloody nose early, which may have been a broken nose because it was clearly bothering him. This was crisp and well worked. Yoshino won it with the Sol Naciente, which K-ness fought like hell to break before succumbing. ***

During the break, they ran a surprise promo from Mexico with Eita, Tomahawk TT, & Yuta. They are forming a unit called Millenia, which has something to do with all three being born in the 90’s. Tomahawk TT’s name was shown on screen as T-Hawk, and I’ve been told Yuta is not known as U-T. This was not referenced, but all three will be working the DGUSA New York City double shot July 27 & 28, and presumably all DGUSA & Evolve shows moving forward until their excursion is over.

6. No DQ – YAMATO vs. Masaaki Mochizuki – Aside from some Mad Blankey interference, there was very little in the way of utilizing the stip. This was a strong win for the newly heel YAMATO, who choked Mochizuki out and taunted him afterwards. ***

7. Open the Twin Gate Titles – Akira Tozawa & BB Hulk (c) vs. Naruki Doi & Ricochet – This match was phenomenal. Ricochet in particular was fantastic, and he’s clearly the best flyer in the world. The pace of this match, the crazy highspots, the timing of everything, this was as close to a perfect tag team match you will see, especially if you dig the “go, go, go” style of match. Even if you don’t, you should go out of your way to see this, if for nothing else the spectacle and athleticism. Tozawa comically tried to copy Ricochet’s triple backflip taunt, and caught a boot to the face for his trouble. Ricochet hit a picture perfect springboard SSP to the outside. Richochet tried a 450, Hulk moved, Ricochet landed on his feet, only to be kicked in the face at that precise moment. An incredible spot with impeccable timing from all involved. Things really started to heat up, and they worked a ridiculous pace down the stretch. I was rooting for kickouts because I didn’t want it to end. Ricochet got a near fall with a Shooting Star Press. Doi kicked out of a Tozawa straight jacket delayed german, to a big pop. Ricochet pinned Tozawa with a picture perfect double rotation moonsault. Does any big star take more pins than Tozawa? Just an amazing match. Easily the best tag team match of the year, and maybe the best tag match I’ve ever seen. Certain Match of the Year contender. Everybody needs to watch this. ****3/4

8. Open the Dream Gate Title – CIMA (c) vs. Shingo Takagi – They had an impossible act to follow. This was an odd match, and a very hard one to rate. They worked super slow, which told me they were going really long. It ended up going almost 40:00, with only the last ten at faster than crawl pace. It was almost like watching two different matches. CIMA scored a couple of  near falls with the Meteora. Very dramatic closing stretch, because you had the feeling this was a 50/50 match with Shingo having a real chance. Shingo won it with the Last Falconry, which got the title change pop. CIMA was either doing the best sell job of all time, or was legit dehydrated and in bad shape, as he was vomiting into towels and could barely speak. He cut a looooong promo anyway, putting over Shingo and declaring this a new chapter for Dragon Gate. Mad Blankey hit the ring and Hulk kicked CIMA in the head. They talked some trash. I was told this was designed to keep Shingo off the mic, because he’s a weak promo. He did speak briefly before the show ended. ***3/4 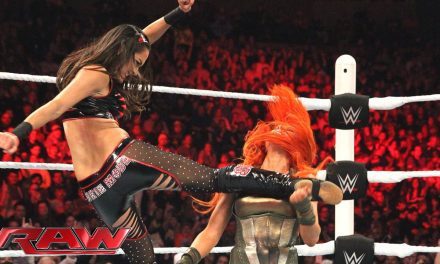