The best storyline of the 90s as far as World Championship Wrestling was concerned revolved around Sting’s transformation beginning in 1996 that dominated WCW Monday Nitro through 1997. You can check out the introduction to this series and part two to catch up. Where we last left off, Sting had just aligned himself with “Macho Man” Randy Savage while the others on the roster were also undergoing “the bat test.” In part three, we are left to wonder, what does Sting want?

As has been customary behind the camera for decades and in front of the camera in the nWo, Hollywood Hogan and Eric Bischoff have a circle jerk in the middle of the ring. They poke fun at Randy Savage, Roddy Piper & the Giant for losing to the Immortal one.

4:30 into the clip below, the two see Savage & Sting in the crowd together. Bischoff tries to sweet talk Macho while Hogan does the same for both. Attempting to recruiting fresh blood or just plain politics?

Remember, this whole segment involving Sting was less than a minute. The men booking this story were genius at this point (this doesn’t apply to anything else on the show, mind you). There was no rushing at all, and note that Nitro was beating up World Wrestling Entertainment’s Monday Night Raw in the ratings at this point (Nitro’s historic 84 consecutive week winning streak started in June ’96 and during this particular stretch, Nitro was consistently doing low-mid 3.0s while Raw was pulling low 2.0s), so that undoubtedly helped their confidence.

Also, note that this appears to have been the first time Sting and Hogan were in the arena and on television at the same time since Sting changed his demeanor all the way back in September!!! They still had not been in the same ring since Fall Brawl.

Something like this is unfathomable in pro wrestling in 2013 (and we’re not talking about part-timers as though The Rock returns for a spot when his film schedule allows him to).

Poor Diamond Dallas Page. He’s one of the guys with nothing but heart for WCW during this stretch and The Outsiders have him cornered in the ring. Hall and Nash have lead pipes. Uh oh.

But wait! Sting and Savage show up in the crowd, so naturally Hall and Nash bail. DDP is safe.

In wake of their actions from last week, Sting & Savage perform the baseball bat test with DDP and he passes. Generally, unless he’s stalking someone’s wife, Page is a cool dude.

*This was when they were doing the ridiculous segments with Piper in Alcatraz…yes, Hot Rod was (I guess) by himself in the infamous prison, maybe to prepare for his upcoming title match with Hogan? Just to prove that while they got the big long-term main event angle rocking like gangbusters, they were still behind some weird deals.

The video below is the entire episode of Nitro, but the Sting segment is the final part of the show (1:52:00).

Hogan is with the nWo posse (Elizabeth, DiBiase, and Bischoff) and talks trash about Rowdy. Sting and Savage walk out from the back and stand in the aisle.

Referring to himself as a god, he says he put Tampa on the map.

The guy who used to have 24-inch pythons boasts about how he put Madison Square Garden on the map.

Finally, he proclaimed himself as the man who put WCW on the map! Uh oh, Sting is walking down the aisle!

He’s only able to take a handful of steps before Macho Man stops him and they retreat to the back.

Wow, this is great. Again, realize that what I’m talking about makes up less than 5 minutes of their 2 hour shows each week. Regardless, it’s great. Hogan not paying much mind to Sting, just goes on and on and on about how he’s a god and how he built pro wrestling. He built WCW, meanwhile Sting is obviously taking offense to all of it, but Savage is the logical mind here (lol) and tells him now is not the time.

Okay, remember when I was going on and on about how this whole thing was outstanding? SuperBrawl, it hits an iceberg.

The main event was Hogan defending the title against Rowdy Piper in a rematch of Starrcade, this time WITH the WCW/nWo heavyweight championship belt on the line.

Because it’s the two old guys (by ’97 standards, mind you — on WWE television, they even refer to it as Age in the Cage), there were many bells and whistles, lots of interference. Eventually, Savage and Sting head out to keep an eye out. Once Piper isn’t getting beat up, Sting leaves. Savage sticks around to turn heel and join the nWo. Seriously.

Despite the fact that the referee clearly saw Piper beat Hogan with the sleeper, Savage pulls Hogan’s foot under the rope so the ref inexplicably keeps the match going. Savage gives Hogan a weapon to use and he pins Piper (perhaps one of only a handful of times he’s been pinned since becoming a main-eventer in the mid-’80s).

Savage is now feuding with DDP. In a trivia note, more than two years later at Spring Stampede 1999, it was Macho Man as special guest referee who counted the 1-2-3 when Page won his first WCW World Heavyweight Championship in a four-way with Ric Flair, Hogan and Sting.

In the main event, there’s a convoluted idea to put all the WCW belts on the line in a multi-man match involving Lex Luger, Harlem Heat and others against the nWo.

Sting appears from the back, enters the ring between the nWo and WCW rosters. *This is the first time Sting and Hogan are in the ring together since Fall Brawl 1996.

Face to face with Hogan and Hulk hugs him. Sting remains expressionless but appears to now be with the nWo as the show concludes.

Sting enters the arena with the nWo (all 1,000 members) and they talk trash about Piper and boast about Hogan’s relationship with Ted Turner. All the while, Sting watches from the corner of the ring, separate from the group.

In the main event, Luger & the Giant are scheduled to battle the Steiner Brothers but it degenerates into chaos (1:36:50) thanks to nWo interference as they fill ringside as WCW guys are in the ring. Sting has his bat on the outside with the crowd chanting “WE WANT STING!” With the show heading off the air, Sting is still minding his own business on the outside.

“You are such a big chicken!” – Tony Schiavone to Bobby “The Brain” Heenan – HA!

On the spring break edition of Nitro (best remembered because of the fact the ring was above a pool), Chicago Bulls star and future NBA Hall of Famer Dennis Rodman joins the nWo and they have the usual promo in the ring.

Sting stands with them but never says anything, or does anything really.

This is the end of part three (of six) as we inch closer to Starrcade. Trust me, the summer and fall included a lot plodding, as they (understandably) had to bridge the long gap until the most anticipated match in WCW history. Either way, there’s still lots of memories, fun and some not so fun, as we find out in no uncertain terms what Sting wants in part four. You can expect that soon. 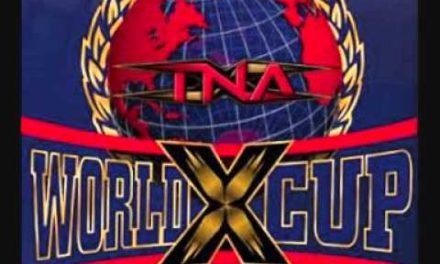