To listeners of Voices of Wrestling podcasts, this should come as no surprise, but personally and largely as a site, our interest level for WrestleMania 29 is very low.

It’s hard to put a finger on exactly what it is, but it’s undeniable. We knew the top of the card over a year ago, the minute WrestleMania 28 wrapped Joe Lanza and I had a podcast where we laid out these exact matches: John Cena vs. The Rock II, Undertaker vs. CM Punk and Brock Lesnar vs. Triple H.

We always decree World Wrestling Entertainment for not providing the smart viewer with a longer-term storyline build and now look at us, they gave it to us and we’re still complaining.

That, however, is the root of the issue. That’s not what we got. Sure, we knew the matches a year ago but there was certainly no direction towards them until we officially hit “WrestleMania season”. Worse yet, “WrestleMania season” was literally after Elimination Chamber. When the dust cleared with his feud with CM Punk, The Rock and John Cena finally turned their attention to one another. This is despite the fact that they wrestled on the same shows on and off for a year, but instead of subtle hints or a direction towards the feud, we have nothing. I’ll get into more detail about the feud as we get there. CM Punk vs. The Undertaker speaks for itself, on paper it seemed to be the one most of us were looking forward to, but I’d be lying if it were perhaps my least anticipated main event match.

Lesnar vs. Triple H was built up well and has the feelings and characteristics of a yearlong buildup, missteps lately though have taken the match down a few rungs. Jack Swagger vs. Alberto Del Rio may require an entire column to explain the issues here, but we’ll get into more detail about each as we go.

I’ll be giving values to each of the WrestleMania main event matches and my personal interest level in seeing them. This, of course, means absolutely nothing because WrestleMania is still going to do record business for WWE, but I’m interested in how much interest level varies from our readers and other members of the VOW community.

I find it hard to believe too, but I’m generally excited about this match. Their SummerSlam match was bad and there is no denying that. Triple H looks like he definitely did some extra work in the gym while he was off meaning his mobility is likely to be worse than it was even last year. The fact remains, if booked properly this match could be good and it’s because of Brock. It’s the very idea, the very sense, everything that Brock stands for.  Chaos, unpredictability, wildness, etc. These are all traits that Brock brings to the table and if they truly book this match to follow those, it has the chance to be good.

If it’s a Triple H directed, catch as catch can, look at all of our holds, then it will bomb. I don’t think there is middle ground with this one.

The build started great, the bloody brawl was perfect; it personified exactly what I would look for in this match. I want an all-out bloody brawl based on hatred. It’s just that simple. When word came down that Paul Heyman wanted Triple H to agree to a stipulation my heart sank. At first, I thought they would do an MMA-style match, perhaps an Octagon or the dusting off of the Lion’s Den to prove pro wrestling guy Triple H beat former UFC champion Brock Lesnar, look how cool wrestling is~!.

Thankfully, that wasn’t the scenario but Plan B was much worse. Triple H was putting his career on the line! You know, the part-time wrestler that retired last year and hasn’t wrestled since, well, yeah, he’ll retire if he loses. Forgive me (and the live crowd) for not caring.

Most of us at Voices of Wrestling seem to agree at the confusing and relative mediocre build to this match. The Jack Swagger character still hasn’t gone bold enough to create that aura of hatred. He’s just not that. As Joe Lanza always likes to point out, why are Zeb and Swagger heels? They’ve never overtly said they hate Mexicans or want them out of the country, the worst they’ve said is, we wish illegal immigrants wouldn’t take jobs. Yeah? That’s really daring, given the strong pro-Illegal Immigrant supports.

Alberto Del Rio as a face isn’t working. The face character is bland, generic and quite literally came out of nowhere. One day, Michael Cole said you should start cheering for Del Rio and voilà, he’s a face! As we’re seeing, it doesn’t work that way. Fans need a reason to like you and just putting the Mexican flag on his trunks isn’t working.

It’s even more telling how super-over as a baby face his manager, Ricardo Rodriguez is. WWE continues to try to move that reaction to Del Rio and it’s not gaining traction. At this point, I think fans would rather see Ricardo face Swagger at WrestleMania.

The only reason I don’t give this match a zero or a one is because the match itself, the in-ring, it will still be very good. Del Rio is a bland character and his in-ring work leaves a lot to be desired, but he’s insulting in any way. He does a solid job in-ring and I have a feeling, depending on time giving, this could be a *** to ***1/2 match.

With that said, I’m still very underwhelmed by the buildup to this match and it’s certainly one of the main events, I’m not highly anticipating.

The Undertaker vs. CM Punk: 6

Woah, wait, I gave a six for CM Punk vs. The Undertaker, at WrestleMania? I’m having a hard time believing it but I can’t understate just how boring and uninspired the build to this match has been. I long contend that without the death of William Moody (Paul Bearer) this match would be infinitely better. The idea of CM Punk’s streak as champion versus The Undertaker’s WrestleMania streak is all the intrigued and hype you would need. Punk is the guy doing it all day, every day, all year and the Undertaker comes once a year gets all the hype and then leaves. It’s perfect.

Instead, we have CM Punk running around with an urn, playing with it backstage and we’ve apparently reverted to 1995 with Punk taking over the Kama Mustafa role. Maybe he’ll melt it into a necklace or something.

It’s just not needed, it’s childish and cartoony and it’s the antithesis of what Punk has stood for and what propelled Punk to main event status some two years ago. Punk is the reality-based wrestler that won us over with his brutal honesty. He won fans over by being a real person doing real things in a wrestling ring. It wasn’t Vince Russo-style shoot interviews, but it was the closest thing without insulting our intelligence. Now, in perhaps the biggest singles match of his career, he’s running around playing with an urn that presumably has the ashes of The Undertaker’s dead manager Paul Bearer. Let’s not forget the urn use to give The Undertaker powers and allow him to recover from any type of pain.

Build aside; I’m just not confident the match is going to be any good. The Undertaker vs. Triple H was all crowds, it was still good but it was all crowd. It was two guys who knew how to work a crowd in a big scenario but the in-ring was largely 30 minutes of guys switching off hitting this finishers then laying down for minutes in-between. Some enjoyed it, personally, I’m one of them but can we really do it again this year?

This is the one rating I’m more uncomfortable with and have the biggest chance to be completely wrong on I may be underrating it because I don’t believe Punk has any chance of beating The Undertaker. Granted, I didn’t think Triple H had much of a chance but something in my mind said, Triple H is such an egomaniac, maybe he convinced Vince McMahon he should win. I have none of that with CM Punk, I don’t see any scenario in any world where Punk wins and that hurts it for me.

This very well may be a classic match and I could look like a total idiot when it’s all said and done but color me unimpressed until the bell rings.

Meh. Just meh. That’s as much thought as I can give this match.

There’s just nothing to it. I don’t get why I should care about them fighting one another.

Sure, they had a match last year and The Rock won, but who cares? Guys win matches all the time. I just don’t believe John Cena when he says this match is so important to him. It’s not, if you lose, you’ll probably get a title shot in a few months. WWE has created a culture where no single match really feels special, even one that’s only happened twice before. It’s simply impossible to believe that this match means enough to define a career for Cena. If he wins, he’s champion again. If he loses, oh well, he’s still main eventer John Cena who will receive probably 5-10 title matches by the end of the year.

There’s just nothing here. I can’t even get mad about it because it’s been that bland. The only reason I gave it a four is because it involved two of the biggest superstars in WWE history and last year’s match was good. I don’t think they can follow it up because one of the participants is a little, uh, a lot bigger than he was last year.

Worse yet, I’m underrating it because of the obvious finish. John Cena defeats The Rock, stands triumph, The Rock looks like he’s going to get mad but gives Cena handshake and yay, and everyone loves Cena now, right? Wrong.

I doubted my prediction on Punk/Taker, but I do not doubt this one. There is nothing in this match. Honestly, what makes this year’s seem so underwhelming is just how great last year’s was built up. When you compare the two, it’s obvious why I’m so down on the WrestleMania 29 main event. We’ll wait and see, but I’m not holding my breath. 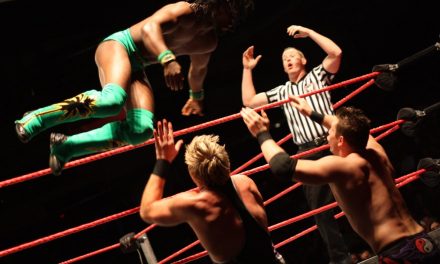