The THIRD edition of The Best of Pro Wrestling 2012. The second part of the two-part series that looks at the honorable mention candidates from the American Indie scene in 2012. They didn’t quite have what it takes to be considered best of the best, but very much worthy mentions and matches you should seek out.

Best Event – PWG Death To All But Metal And, now onto the rest…

A rematch from the Untouchable 2011 show, Gargano and Tozawa deliver once again. Prior to this match, the chatter around the ‘net was predicting a title switch due to the rumors that Gargano had signed with the WWE. What they got was one of the finer matches of the year for the very hot DragonGateUSA promotion. These two have come so far in the span of two years and this match delivered like two seasoned veterans. It kept you on the edge of you seat the whole way through. Between this match and the following match, it turned the Untouchable 2012 from a DUD, to worth the price of admission.

Following the WrestleMania Weekend Show where Open the Twin Gate Champions CIMA and Ricochet relinquished the titles, CIMA would move on to a new “apprentice” of sorts in the form of young high flier AR Fox. El Generico would also have a protege in one of DragonGateUSA’s up-and-coming stars, luchador, Samuray Del Sol. These four would put on a show stealing matches. Your typical fast-paced, DragonGate-style tag match bonanza with a killer finish is what many expected and they delivered.

The two matches can be seen HERE

A rematch of their Mercury Rising 2011 bout that saw high-risk bout that you’d likely expect with PAC edging Tozawa out for the pin when Tozawa couldn’t quite get PAC with his Bridging Delayed German Suplex finisher. A year later, they would have a rematch and one of the things that makes DG and its affiliates so good lately is they rarely forget match psychology…even a year later. It was a very important aspect of this match and it made it all the better. The clash of styles, Tozawa the ground based wrestler and PAC the British high flyer really came off very strong. The brutality in this match was kicked up a few notches as well. The ending was a great bookend to their first bout, and it really took this match up a few notches because of it.

You can see the match HERE

One of my favorite feuds this year comes from an unlikely pair. Gargano and Taylor had been stablemates across the United States and abroad under various names such as Team FIST and Ronin (with Rich Swann). During WrestleMania weekend, an injury angle would force current Open The Twin Gate (tag team) champion CIMA and Ricochet to drop the titles leading to a match between the aforementioned Ronin (Taylor and Gargano) and Ricochet and his replacement for CIMA, Masato Yoshino. The angle would develop mid-match with Gargano not wanting to heel-out to win the titles with Taylor going full-on heel since the start of the show. Ronin would eventually lose only for the eventual heel turn of Taylor to come post-match and from there, a half-year long feud would begin. They would meet at Enter the Dragon Gate 2012 in an ‘I Quit’ Match and during it, you will see one of the nastiest bumps of the year and the match that took Johnny Gargano to another level. Brutal match, worthy of a blood feud like Gargano-Taylor. 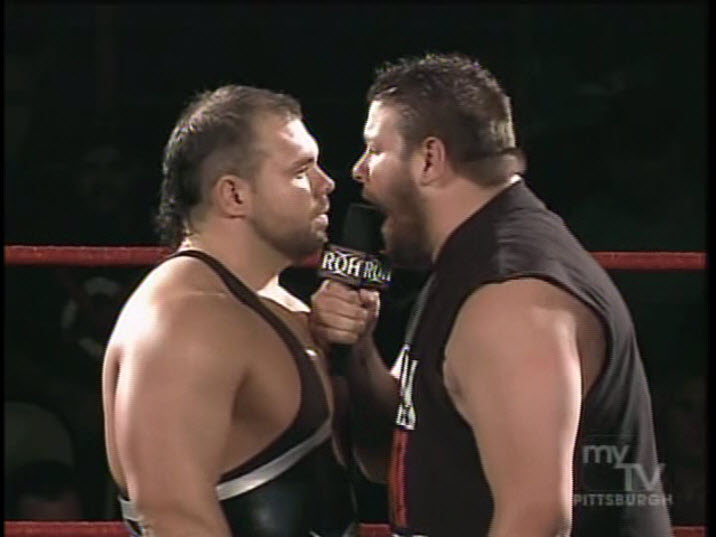 What could only be described as the result of two male mooses (or, would it be moosI??) colliding, Kevin Steen and Michael Elgin would face in your typical hard hitting ROH-style match with tons of near falls and ridiculously big moves from two big guys. It was super hard hitting fun that by the end of the match had you at the edge of your seat. There were some moves in this match that just made you shake your head at the brutality by these two big mooses. The match would be overlooked due to the post-match shenanigans with a big reveal that would line Kevin Steen up to face his rival El Generico at Final Battle 12, but this match delivered exactly what you’d expect and did it right. It was a bit slow to warm, but about 15 minutes in, this one heats up and its just big move after big move.

Two of the best athletes in all of wrestling, ACH and AR Fox would wrestle many times in 2012 around various Indie promotions. Their finest effort comes with this beauty at Absolute Intense Wrestling, an Ohio-based Indie promotion. Originally slated to be Fox versus the also-awesome Uhaa Nation prior to Uhaa injuring his leg early in the year, this match gives you what you’d expect from these two, a fast paced spotfest (and I mean that in a good way) that has both wrestlers performing some of the most ridiculous spots you’ll see this year. What puts this match into the realm of “Best of…” is the depth these two actually bring out despite it being such a spot-focused match. It isn’t often you’ll see high flyers add those layers, but they do here and it really makes this match something special. Definitely some of the year’s best wrestling eye candy.

Really Over the Hill, Still Not Over the Thrill: The 15 Best Japanese Wrestlers Over 50

Two Wrestlers, One Light Tube and (Maybe) the 2019 Match of the Year