Did I miss something; was there some huge leadership shakeup in World Wrestling Entertainment over the last month? I did not think so, but you’d have a tough time convincing me. The show has evolved so much in such little time.

The real shift occurred after the September 3 Raw show in Chicago, a show I had the “privilege” of attending live. That Raw was so beyond boring and tedious that I had planned to write an article detailing the failed three-hour Raw experience.

Highlights of that night included an endless AJ segment, which was capped off by the Raw general manager hitting a chair on the mat for a good five minutes. Yes, this was thrilling television and even better to watch live. Even my girlfriend, attending her first wrestling show ever, turned to me and said “Is she ever going to stop, are they just trying to fill time?”

It seemed they were.

I am glad I held off on writing that article, because since then the show has done a 180; for the first time in a really long time, Raw has largely been good wrestling television.

I hate to use the episode where Jerry Lawler suffered his heart attack as the measure, but it is simply where the turnaround started (September 10 in Montreal). That show started, perhaps an omen, with a tag title match between The Miz/Antonio Cesario andKofi Kingston and R-Truth.

That episode was more or less a microcosm for all WWE has done well lately; making the tag division seem important again is a major key in building stars in the future. It is understood that many of theWWE’s top stars of the past had extensive tag team experience.

Most notably, Bret Hart and Shawn Michaels, two key players in the WWE’s resurgence back to relevance in 1997.

That’s, of course, not to say that tag teams should be the focus of the company, but building that division throughout your midcard can only lead to good things. The obvious positive is the ability to make stars—something the WWE has had tremendous difficulty with over the past five to 10 years.

Breakup angles alone have launched the careers of many superstars, past and present. Most recently, The Miz launched himself into relevance (and back out of it) due to a breakup with John Morrison. Michaels famously superkicked his way to the top when he broke up with then-teammate Marty Jannetty.

It does not require a whole lot of historical knowledge of wrestling to know the benefit.

An expanded tag division also allows more wrestlers to get TV time and more of a chance to find a guy who just clicks with the audience.

The Prime Time Players (Titus O’Neil and Darren Young) were lost in the singles ranks but have found their niche in the tag division. Rey Mysterio and Sin Cara, while still popular among fans, are not top single wrestlers anymore. Instead of being lost in the shuffle, they have been given new life in the tag team division.

As mentioned, the positive of the tag division is a stronger midcard that outside of tag teams has expanded greatly over the last few weeks. In that time alone, Cesaro,Ryback and Wade Barrett have made huge impacts.

Cesaro is showing himself as a wrestler who can get over with the crowd and put on safe “WWE” style matches but still put his own Claudio Castagnoli flare to them. It has been quite impressive.

Ryback has had trouble getting to that top level and moreover avoiding Goldberg chants, but the win streak is starting to work. The crowd reactions alone tell the story, and the “Feed Me More” chants are getting increasingly louder with each passing week.

Barrett’s return is a huge positive for the midcard, as he brings another legit star. With his character reformation, he feels new and fresh while at the same time familiar enough that they don’t have to start at point A with him. Moreover, low to mid wrestlers like Damien Sandow are finding time to get over.

Simply put, what three-hour Raw was meant to do is finally happening. Instead of longer backstage segments and longer speeches, more wrestlers are getting time, squash matches are in some ways back and wrestlers are just getting over.

This is without even mentioning the continued entertainment of Daniel Bryan and CM Punk’s character really gaining new heel footing, but I could go on for days about each of those subjects.

The fact of the matter is Raw and the WWE are seemingly getting it; they are getting back to the basics and the tactics the wrestling business has used for years to make money. The development of a strong midcard and a strong tag division has led many companies, including the WWE previously, into boom periods.

Could it happen again? We will just have to wait and see, and honestly, for the first time in many years, it won’t feel like a chore to watch it progress.

Match of the Month (May) – Voting 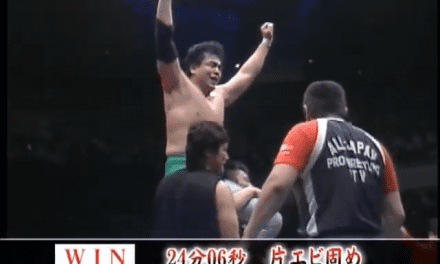